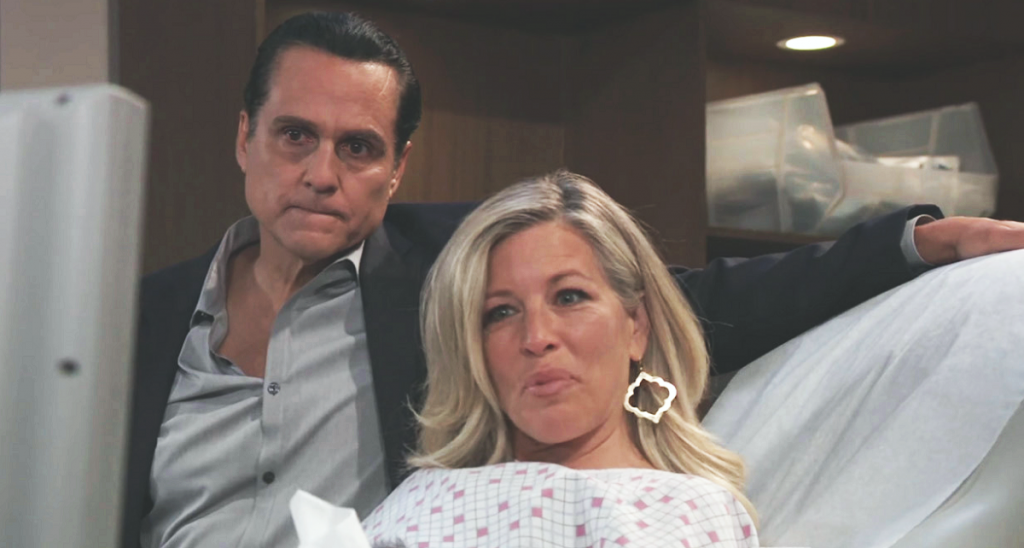 General Hospital (GH) spoilers tease that Sonny Corinthos (Maurice Benard) will arrive at the hospital just in the nick of time for his and his wife Carly Corinthos’ (Laura Wright) new baby’s birth!

Other General Hospital spoilers tease that Carly will start out to the hospital by herself, possibly going into labor ahead of when the caesarian section birth is planned. The baby has been shown by prenatal testing to have a serious birth defect, spina bifida meningocele, and will need surgery immediately after birth to close his or her spine.

There has been no way to tell through ultrasounds exactly how serious the problem will be. And medical professionals generally do not use more advanced imaging such as x-rays and CT scans or MRI because of the risk of damage to the fetus from the radiation associated with these type of tests.

General Hospital Spoilers – Carly Corinthos Arrives At Hospital By Herself

There will be some kind of trouble aboard The Haunted Star, and her mother Bobbie Spencer (Jacklyn Zeman) will be stranded somewhere. Although it is not certain it will be aboard the ship or that Carly will be there as well. But for whatever reason, Carly goes to General Hospital for the birth by herself, without Sonny.

Whether Bobbie or Carly will be on the Haunted Star when the trouble happens is not certain. But with Sam McCall (Kelly Monaco) rushing there and becoming trapped, and Jason Morgan (Steve Burton) going to her rescue, it is quite possible Sonny will be there also. Viewers also need to remember that although spoilers are spread out over several calendar days, soapy scenarios are frequently spread out over several days. Even though in the script they are written as happening on one day.

Whether Sonny is involved in the Haunted Star situation or another situation, there will be some good reason that he does not take Carly to the hospital to have their baby. Sonny is a family man above all else, and the situation preventing him from taking Carly must be very serious and something he absolutely has to handle.

General Hospital fall previews indicate that the baby’s situation will be bad, and will test the Corinthos family to the point where they may not survive intact! This could mean either the stress surrounding caring for a baby with such serious needs takes a toll on the family and stresses Sonny and Carly’s marriage, or it could mean the baby itself may not survive since he or she is also part of the Corinthos family.

Spina bifida meningocele can manifest in a much more serious form called myelomeningocele. Most children with this birth defect survive. But they can be left with many disabilities, including paralysis, difficulty with bowel and bladder control. They can also have a Chiari II malformation, hydrocephalus (excessive fluid in the brain), and developmental delays.

In general, the higher the spinal opening occurs on the back, the greater the physical impairment. If Baby Corinthos is found to suffer from this more serious form, he or she will require constant specialized care, and may not live very long. This could indeed test Sonny in particular and he might be so stressed by it he’ll want to bail!