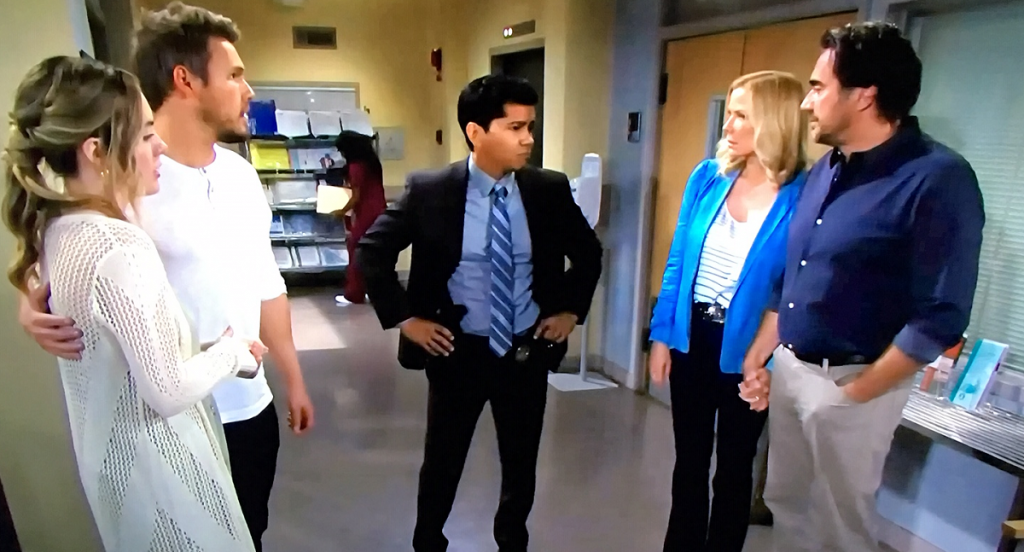 The Bold and the Beautiful spoilers for Friday, August 30, tease that the Forrester, Logan, and Spencer families will wait anxiously for word about Thomas Forrester’s (Matthew Atkinson) condition.

As B&B viewers know, Thomas is in very serious condition at the hospital after falling off the cliff outside of Steffy Forrester’s (Jacqueline MacInnes Wood) house. He was in the middle of an argument with Hope Logan (Annika Noelle) when Brooke Forrester (Katherine Kelly Lang) intervened. She pushed Thomas, and Thomas fell over the cliff.

Word has slowly spread to the various friends and loved ones of Thomas, Brooke, and Hope. On Friday’s B&B episode, expect to see various conversations as everyone waits and worries about what’s going to happen next. Everyone will surely anticipate a police investigation. They’ll be concerned not only about Thomas’ condition but also the very real possibility that Brooke could be prosecuted in connection with his death.

Bold And The Beautiful Spoilers – Detective Sanchez Investigates The Accident

Of course, those who know Thomas are aware of his many misdeeds over the past few months. He not only kept the secret about Beth Spencer (River Davidson and Madeline Valdez) being alive, but he manipulated both Hope and Douglas Forrester (Henry Joseph Samiri). In addition, he was heavily involved in Emma Barber’s (Nia Sioux) fatal car accident, so he’s going to have a lot to answer for when he wakes up.

Meanwhile, on Friday’s new B&B episode, it appears that Detective Alex Sanchez (Jeremy Ray Valdez) will have his share of questions about what really happened on the side of the cliff before Thomas’ fall. As B&B viewers know, Detective Sanchez just arrived at the hospital, fresh from a visit with Flo Fulton (Katrina Bowden), during which he learned that Thomas had threatened Flo’s life if she told the secret about Beth.

Of course, Detective Sanchez also knows how Brooke felt about Thomas prior to the accident. B&B viewers will remember that Detective Sanchez visited Ridge Forrester (Thorsten Kaye) and Brooke at their mansion to ask questions about Thomas’ whereabouts. He surely picked up on Brooke’s hostility and animosity toward Thomas, and now he’s going to want to ask her some tough questions about what happened.

Look for Detective Sanchez to continue to try to get to the bottom of what happened at the time of Thomas’ fall, as he grills Brooke and Ridge about what happened. He’s already noted that they are acting like they’re hiding something, so he’s going to want some answers, and fast. His interest was clearly piqued when he learned that Thomas was arguing with Hope, and that Brooke was involved, So expect some more questions as he digs for answers.

One wonders what Ridge will tell Detective Sanchez. He very clearly saw Thomas fall after Brooke pushed him. And it doesn’t seem like Detective Sanchez will leave him alone until he admits what he saw. Of course, Hope will ultimately have to tell the same story, as will Brooke. That’s going to leave Brooke looking pretty bad in this scenario. But Brooke will surely point out that she thought Hope was in danger from Thomas. Hope has repeatedly stated that she didn’t believe she was under threat as a result of Thomas’ actions. Unfortunately, she’ll likely be forced to admit that to Detective Sanchez.

Bold And The Beautiful Spoilers: Will A Pregnancy Save Flo From Hard Time? #bb #boldandbeautiful @celebratesoaps https://t.co/sngPHtaGmb

But what will Detective Sanchez ultimately conclude? He’ll probably want to talk to Thomas and get his take on what happened, although Thomas is still unconscious. Fortunately, ongoing B&B spoilers indicate that Thomas will soon wake up and be able to talk with Detective Sanchez – something that will instill fear in Brooke. Brooke may worry about Thomas getting payback on her and telling Detective Sanchez that she deliberately pushed him…something that could very well happen.