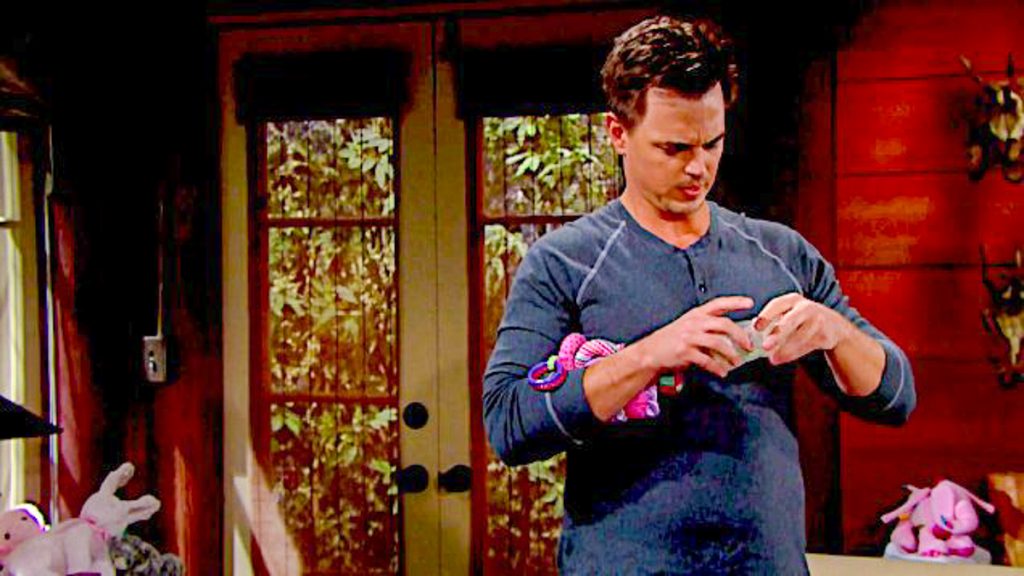 The Bold and the Beautiful spoilers for Thursday, October 24, tease that Wyatt Spencer (Darin Brooks) will get some food for thought. As B&B viewers know, he recently went to visit with Flo Fulton (Katrina Bowden) after he found out that she donated a kidney to Katie Logan (Heather Tom). Wyatt felt really proud of Flo and was grateful that she had made such a selfless decision that saved Katie’s life. He saw pieces of the Flo he used to love shine through, and the two had a good talk.

Well, on Thursday’s B&B episode, Wyatt will get a visit from his dad, Bill Spencer (Don Diamont), who will have some interesting information for him. Bill will reveal that Quinn Forrester (Rena Sofer) paid him a visit and asked him to meddle in Wyatt’s relationship with Sally Spectra (Courtney Hope). As B&B viewers know, Quinn doesn’t like Sally and doesn’t want Wyatt engaged to her. She’d do just about anything to break the pair up, and now she’ll have asked for Bill’s help to do it.

It doesn’t seem like Bill will have any interest in meddling and causing problems in his son’s relationship – after all, he’s been down that road before and it didn’t end well. Rather, it seems that Bill will just give Wyatt the heads-up that Quinn is out to sabotage his engagement to Sally and get him back together with Flo. That probably won’t come as a huge shock to Wyatt at this point, though.

Wyatt may be surprised, though, to learn about his father’s new perspective on Flo. Previously, Bill ranted and raved about how Flo needed to pay for her role in Reese Buckingham’s (Wayne Brady) baby swap and adoption scam. But it seems that since Flo became Katie’s kidney donor, Bill will have had a change of heart. He just won’t be able to put aside the fact that Flo saved Katie’s life, and he’ll probably always be grateful.

It seems that Wyatt’s conversation with Bill will also get him thinking about his own feelings toward Flo. As B&B viewers know, Wyatt dumped Flo after her part in Reese’s baby plot was revealed, but now that she’s donated a kidney to Katie, his feelings have softened a bit. It seems that he’ll leave the conversation feeling a little conflicted about his feelings, as he realizes that he still loves Flo.

Next, on Thursday’s new episode of B&B, Ridge Forrester (Thorsten Kaye) will get a big surprise. He’ll wind up at Brooke Forrester’s (Katherine Kelly Lang) mansion to find that there’s a plot to coerce Thomas Forrester (Matthew Atkinson) into relinquishing custody of Douglas Forrester (Henry Joseph Samiri). It looks like he’ll assume that this is Hope Logan (Annika Noelle) and Liam Spencer’s (Scott Clifton) big plan, but he’ll get a shock when he finds out that Brooke was behind the whole thing.

Bold & The Beautiful Spoilers – Ridge Forrester Gets A Big Shock

As B&B viewers know, Brooke had a lawyer draw up adoption and termination-of-parental-rights papers, and she presented them to Thomas basically telling him to sign them and to let Hope and Liam adopt Douglas. Hope went right along with the plan, although Liam has remained a bit skeptical about the wisdom of the whole thing.

Well, Ridge is going to be livid when he finds out that Brooke spearheaded the effort to get custody of grandson away from Thomas. B&B spoilers say that he’ll be completely blindsided by the revelation, and from there a major battle will take place. B&B viewers can expect to see the beginnings of a major Forrester-Logan war as Ridge digs in and fights for his son and grandson.