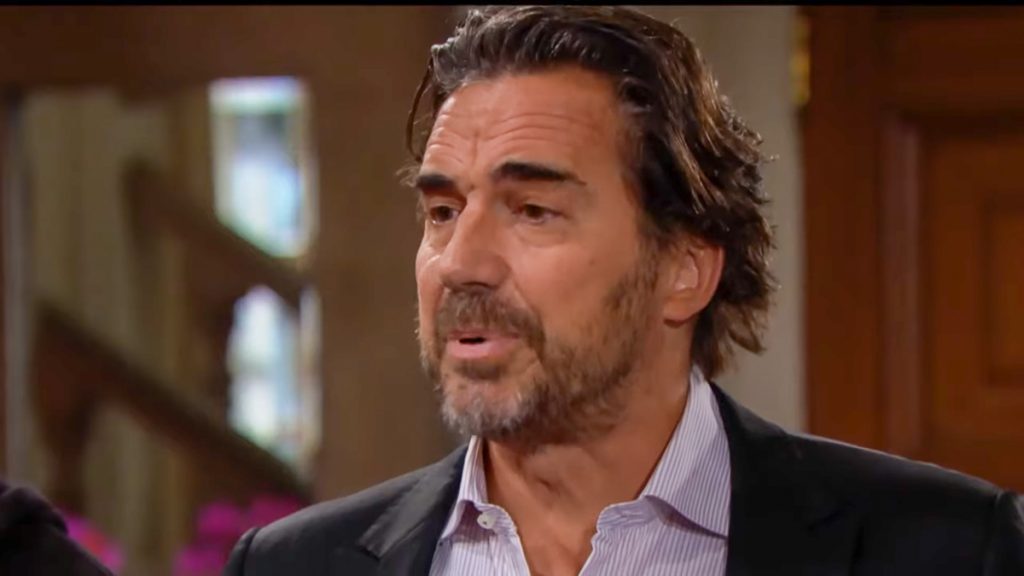 The Bold and the Beautiful spoilers for Friday, October 25, tease that Ridge Forrester (Thorsten Kaye) and Brooke Forrester’s (Katherine Kelly Lang) marriage will approach a breaking point. As B&B viewers know, Ridge and Thomas Forrester (Matthew Atkinson) have just showed up at Brooke’s mansion with the intention of getting Douglas Forrester (Henry Joseph Samiri) and taking him away. They then encountered Hope Logan (Annika Noelle), Brooke, and Liam Spencer (Scott Clifton) discussing their plot to take Douglas away from Thomas.

Of course, Ridge was seriously peeved because he learned that Brooke had adoption and termination-of-parental-rights paperwork drawn up for Thomas. He was infuriated to learn that Brooke has spearheaded an effort to grab custody of Douglas away from Thomas, and he was totally dismayed to learn that Thomas was actually considering signing the papers and letting Hope raise Douglas with Liam Spencer. Ridge confronted Brooke about what she had done, but Brooke remained defiant.

Bold & The Beautiful Spoilers – Does Bridge’s Marriage Stand A Chance At This Point?

Ridge has just declared to Hope, Liam, and Brooke that no one is going to be taking Douglas away from Thomas, and he’s not playing around. He’s livid with Brooke, and it’s starting to look like there’s little hope for their marriage at this point. From Ridge’s perspective, it’s bad enough that Brooke harbors such negative feelings toward Thomas, but for her to actually try to undermine his rights as a parent is just too much.

Ridge has stood back and let Brooke say all sorts of horrible things about Thomas in the past, and he didn’t even fight back hard when she told him that when he came home he needed to have “papers” showing that Thomas had given up his rights to Douglas. But Ridge didn’t really take Brooke seriously at the time. He thought it was all talk. Now he knows that she was dead serious.

From here, things should get pretty dicey. According to B&B spoilers, Ridge will soon be moving into the Forrester mansion with Eric Forrester (John McCook) and Quinn Forrester (Rena Sofer), and he’ll take Thomas and Douglas with him. That will probably signify the real beginning of the end for “Bridge’s” marriage, as Ridge will be choosing to focus on his flesh and blood.

Next, on Friday’s new episode of B&B, Thomas will get some quality time with his son Douglas. As B&B viewers know, Thomas was actually considering whether it would be the right move to relinquish custody of Douglas to Hope and Liam, but now that Ridge has really come through for him, it seems that he’ll focus once again on reclaiming his son.

The Bold and the Beautiful spoilers say that Thomas will share an emotional moment with Douglas, during which he vows to be the kind of father that Douglas deserves. It will be interesting to see how Douglas reacts to this development, especially since he really seems to enjoy being with Hope and Liam. But we can’t forget that Thomas and Douglas did used to have a close father-son relationship, and that they could have that again.