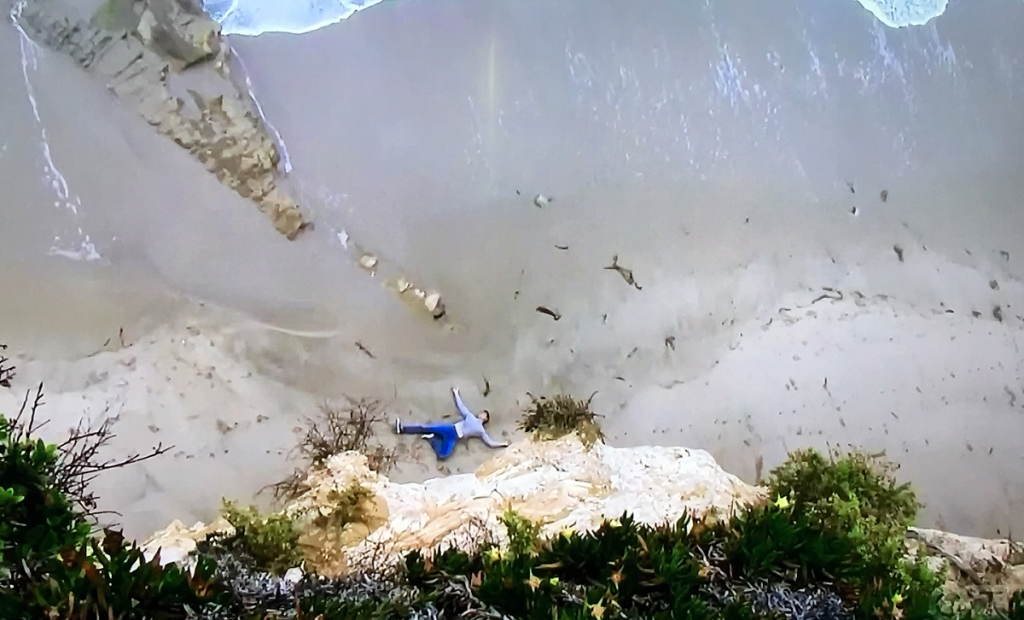 The Bold and the Beautiful spoilers for Monday, August 26, tease that Thomas Forrester (Matthew Atkinson) will be in bad shape. As B&B viewers know, Thomas is currently lying motionless at the bottom of the cliff outside Steffy Forrester’s (Jacqueline MacInnes Wood) house, and how it all unfolded will soon be a point of contention between Ridge Forrester (Thorsten Kaye) and Brooke Forrester (Katherine Kelly Lang).

Here’s how it all went down: Hope Logan (Annika Noelle) and Thomas were arguing near the cliff, after Hope fled the house to get away from Thomas. Brooke arrived at the house and intervened in Thomas and Hope’s struggle, and when she pushed Thomas to get him to back away from Hope, he ended up falling over the cliff. It doesn’t look like Brooke intended to physically harm Thomas; rather, she just wanted him to get away from Hope.

Well, Ridge happened upon the scene right as this all unfolded, and on Monday’s episode, he, Brooke, and Hope will rush to the bottom of the cliff to check on Thomas, but it won’t look good. Thomas won’t be moving, and as Ridge tends to his son and wonders what Brooke was thinking, Hope will call for an ambulance.

Thomas will be rushed to the hospital, and once there, he’ll be tended to by Dr. Jordan Armstrong (Vincent Irizarry), who will make his first appearance on B&B on Monday’s episode. Thomas will have life-threatening injuries. So his life will hang in the balance for a while as the Forresters, Logans, and Spencers wait and wonder whether he’ll survive.

Meanwhile, on Monday’s new episode of B&B, Bill Spencer (Don Diamont) will be feeling protective of his family. As B&B viewers know, Bill was livid to hear about what happened to his granddaughter Beth Spencer (River Davidson and Madeline Valdez). He even sent his own people out to try to track down Reese Buckingham (Wayne Brady) in Europe. But the police ended up apprehending Reese first.

Bill has been pretty vocal about the need for Reese, Florence “Flo” Fulton (Katrina Bowden), and everyone else involved in the Beth swap/secret to pay the price. On Monday’s B&B episode, he’ll focus on Flo in particular. He wants to make sure that she ends up paying for what she did.

Of course, Flo’s in a world of legal trouble, but she’s not in as deep as Reese. Sure, she participated in an illegal adoption. She is also probably guilty of obstruction of justice. But she could at some point get offered a plea deal, and Bill might be thinking ahead to that possibility. He might step in and try to “influence” the district attorney or someone else involved in the process. He’ll want to put a stop to any deal before it starts.

Looking to see what happens on Monday’s episode of #BoldandBeautiful like… pic.twitter.com/eCFAASV2dH

At any rate, Bill will make a vow that Flo will not have an easy way out of the mess that she’s in. Bill considers what Flo did to be personal, and he’ll want to do right by Hope, Liam, and Beth and make sure that Flo pays the price.