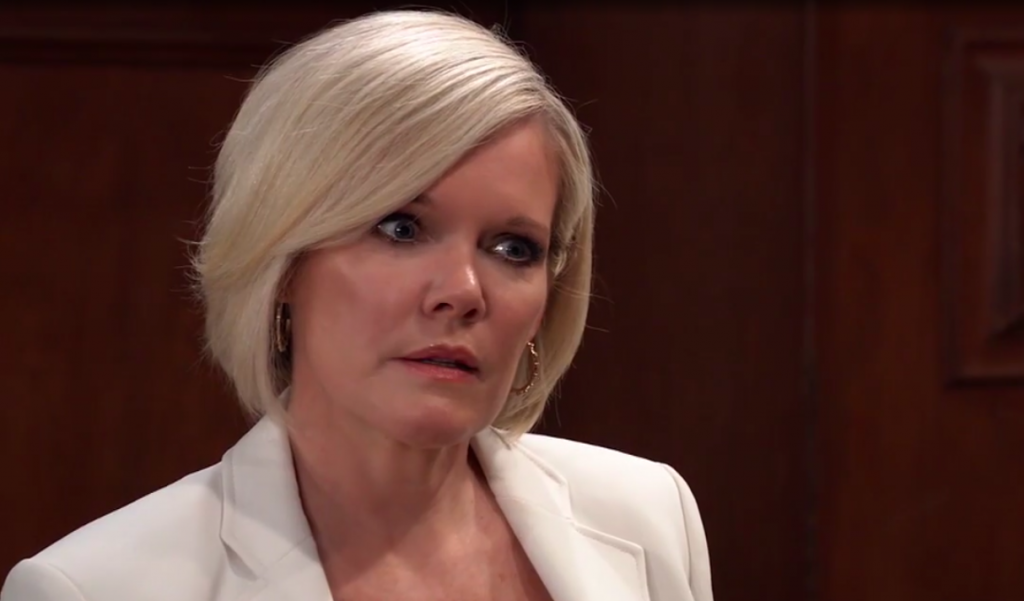 Welcome to your Friday August 23rd General Hospital (GH) recap! We begin our day at the Metro Court Hotel where Carly Corinthos (Laura Wright) has brought breakfast to Jasper Jax’s (Ingo Rademacher) hotel room. She says she’s just checking to see if he has found a permanent place to live. She then asks about his date with Liesl Obrecht (Kathleen Gati), he says he needs to go wake her up – which shocks Carly.

At the Webber house, Cameron Webber (William Lipton) offers pastries to Josslyn Jax (Eden McCoy). He explains that his Aunt Hayden bought a bunch and that Aiden won’t eat them cause he’s waiting for Franco (Roger Howarth) to come back. He does not understand that the Franco they know, may never return.

In the park, Jason Morgan (Steve Burton) and Sam McCall (Kelly Monaco) bring their son to his little league game. Sam tells Jason to close his eyes, take a deep breath, and realize they are in a good place right now.

General Hospital Spoilers – Peter August is up to no good

At the Metro Court, Peter August (Wes Ramsey) is on the phone tell Shiloh Archer (Coby Ryan McLaughlin) that he’s doing his best to get him out of Pentonville. He turns around and Robert Scorpio (Tristan Rogers) is standing behind him. Robert asks Peter why he was visiting Shiloh at Pentonville?
Peter lies and says she was talking to Shiloh about an exclusive for the Invader.

At General Hospital (GH) , Monica Quartermaine (Leslie Charleson) asks Hamilton Finn (Michael Easton) if there’s any update on Sasha’s condition. He says that she is not responding well to treatment which upset Michael Corinthos (Chad Duell), he suggests they use ELQ’s resources. Epiphany Johnson (Sonya Eddy) yells at him that this is a hospital and he needs to be quiet.

Michael goes to sit by Sasha’s bedside as she worries about him catching her illness. Monica tells Finn he needs to have a meal and a walk in the sunshine, he looks a vampire (a nod to Port Charles!). In her feverish state, Sasha wonders out loud if the illness is karma.

In her bedroom, Ava Jerome (Maura West) wakes up from a nap and opens her laptop. The Crimson article is full of insults about the death of Kiki. Suddenly Kiki appears and says “did she really think the magazine article was her path to redemption?” Ava says that she is filled with regrets as to what she did and how she fell in love with her daughter’s killer.

Kiki accuses Ava of picking Ryan over her own daughter.

Carly realizes that Jax was joking about having Liesl in his bedroom. He says Obrecht is a fascinating woman, but there’s nothing going on between them. They both worry about Sasha’s illness and its effect on Michael.

Carly brings up Hayden Barnes (Rebecca Budig) and says he should be careful with her. They agree they should not discuss each other’s romantic partners.

Sam sets up the picnic and says she’s enjoying being a regular family for once. Sam brings up what happened between Franco, Drew and Shiloh. Jason thinks it’s not just about money, but it’s also about having power.

Trina Robinson (Sydney Mikayla) comes over and asks why Cameron has not been at soccer practice. He says he’s just not feeling it after what happened with the mad scientist. Both him and Josslyn say they wish they could just quit school and Trina calls them crazy.

Finn sees Peter and Robert and updates them on Drew and Anna’s search for Andre Maddox. Peter makes a call and tells someone to “make sure Drew does not find Andre.”

Jax asks Carly about the pregnancy and if the baby is okay, she says all is good. Carly says Josslyn is slowly healing from the death of Oscar and must stay in school.

Josslyn says the idea of going back to school without Oscar is too difficult. Ava asks Kiki what she can do help solve the rift between them. Kiki runs down the list of all the awful things Ava did to her and others. Ava begs for her forgiveness and Kiki says she can’t cause she’s dead and disappears.

Michael asks Sasha what she means about the “things she’s done.” Finn gets test results for Sasha and is shocked by what he sees…..flash to preview