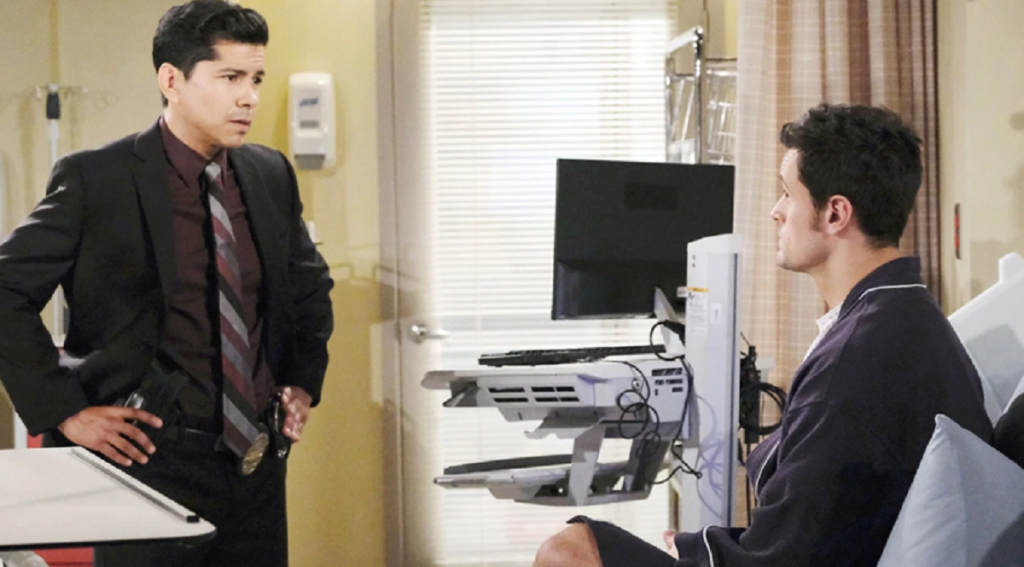 The Bold and the Beautiful (B&B) spoilers for Friday, September 6, tease that Thomas Forrester (Matthew Atkinson) will fess up. As B&B viewers know, Ridge Forrester (Thorsten Kaye) just asked him point blank what happened on the night of Emma Barber’s (Nia Sioux) fatal car accident. This is a big moment for Ridge, as he’s been trying to avoid the issue of Thomas’ involvement in Emma’s death, but it seems that he’s now ready for answers.

According to B&B spoilers, Thomas will recount everything that happened that night to his father. He’ll likely start with the heated argument he had with Emma about Beth Spencer (River Davidson and Madeline Valdez) being alive at Forrester Creations. As B&B viewers know, Thomas did everything in his power to dissuade Emma from telling Hope Logan (Annika Noelle) about Beth being alive, but Emma was determined to tell the truth.

It also appears that Thomas will tell his father about how he threatened and physically grabbed Emma to prevent her from leaving. But when Pam Douglas (Alley Mills) interrupted them, Emma broke away and left in her car. Thomas then followed Emma onto Mulholland Drive, where he chased her and menaced her on the road before she crashed. Finally, Thomas will tell his father how he stopped at the crash site and saw that Emma had died before fleeing the scene.

Well, Ridge will be furious with what Thomas did, and he’ll likely realize that this is a situation that is going to be extremely difficult for Thomas to walk free from. Detective Alex Sanchez (Jeremy Ray Valdez) has already been around twice asking questions about the night of Emma death, and soon Thomas will have to formally answer questions. Sure, by then Ridge will probably have a lawyer secured for him, but still this is looking bad.

According to B&B spoilers, Ridge will lambast his son for what he’s done. His first response will be disbelief and anger, but soon his thoughts will probably turn to how he can best help his son. It will be tough, though, since Thomas has really dug himself into a hole.

The Bold and the Beautiful Alum Ashley Jones Heads To Primetime https://t.co/qcXWc29CLn pic.twitter.com/ekvXg09v02

Bold & The Beautiful Spoilers – Bill Looks For Evidence Against Thomas

Meanwhile, on Friday’s new episode of B&B, Bill Spencer (Don Diamont) will find himself heavily concerned with Thomas’ actions as well. As B&B viewers know, Bill made a promise to both Thomas and to Brooke Forrester (Katherine Kelly Lang) that he would make everyone involved in keeping Beth away from Hope and Liam Spencer (Scott Clifton) pay the price.

Well, on Friday’s episode, Bill will turn his attention to finding a way to take Thomas down for his actions. It looks like Bill will quickly key in on Thomas’ involvement in Emma’s death as a way to make him pay. After all, Thomas probably won’t be legally pursued for lying to Hope and manipulating her into marriage. But he does stand a good chance of being prosecuted for contributing to Emma’s car accident if the right evidence comes to light.

And it looks like that’s where Bill will come in. According to B&B spoilers, Bill will start searching for cold, hard, evidence against Thomas. One wonders whether he’ll think to look at the GPS in Thomas’ car, like Xander Avant (Adain Bradley) did. With Brooke’s help, Bill could probably easily access Thomas’ car and take a look at the GPS showing that Thomas drove on Mulholland Road that night and stopped right at the crash site. Whatever the case, Bill will be on a mission against Thomas, and it looks like he just might get the job done.