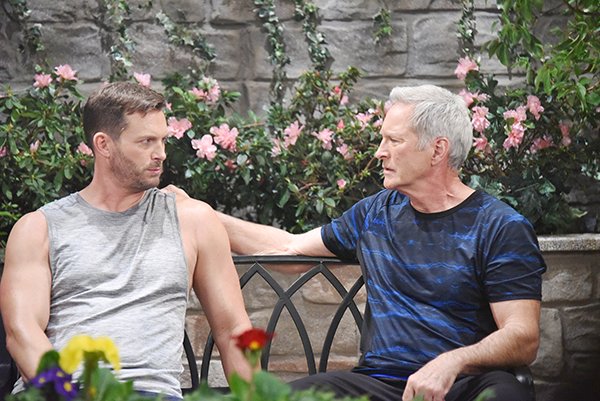 Days of Our Lives (DOOL) spoilers tease Brady Black (Eric Martsolf) will continue to have problems fighting his heart. Feeling both disgust and love, could he end up with Kristen DiMera (Stacy Haiduk) again? Fans are debating on the future of “Bristen.”

Brady hates Kristen for the things she has done. However, at the same time, he also has a strange attraction for her. It is getting more difficult for him to fight his feelings. In fact, a recent episode showed the two passionately making out before he came to his senses. It seems that their relationship will become even more complicated if Kristen’s scheme goes according to plan.

Days of Our Lives Spoilers -A Sinister Scheme

Her newest plan has to do with Sarah Horton’s (Linsey Godfrey) baby. She pushes Xander Cook (Paul Telfer) to give her details about Sarah, which leads to her finding out the doctor is pregnant. Then, she begs Dr. Rolf (William Utay) to help her. The mad scientist will prepare for an “unusual procedure.”

Fans believe this is another fetus abduction, like what happened with Theresa Donovan (Jen Lilley). The difference between that plot and this one is that Theresa didn’t even know she was pregnant until after the child was born. He had a medical condition, which is why Kristen had Theresa kidnapped.

Jennifer is in grave dangers and Ciara and Jordan spar on Wednesday's #DaysofourLives.#DOOL #DAYS
Read more below ⬇️⬇️⬇️⬇️⬇️https://t.co/FVKVBKQL0S

Fans are debating on the future of Brady and Kristen. Will her plan end up getting her what she wants? Or will the truth come out, leading Brady to hate her even more than he already does? Viewers are undecided on what will happen.

It is possible that this storyline will carry on after the time jump. Brady won’t be able to turn his back on a child, especially if Kristen claims it is his. Everyone will just have to keep watching to find out what happens next.