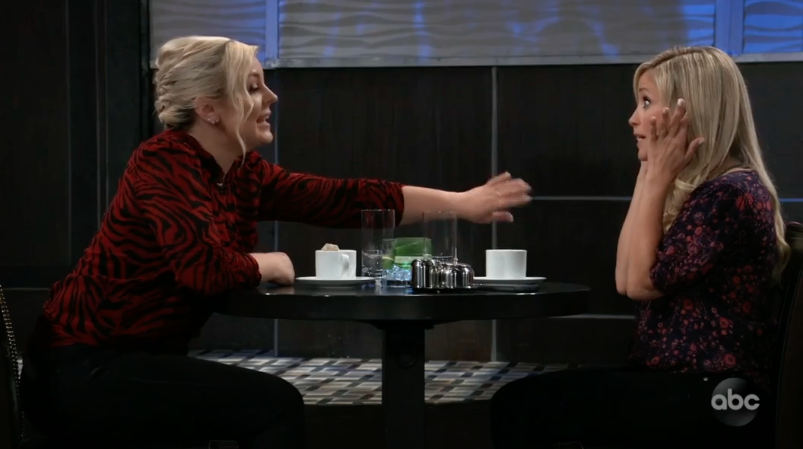 General Hospital spoilers tease that Friday, September 20 will be another episode full of drama and mystery for General Hospital viewers as Port Charles residents interact!

Best friends Lulu Spencer (Emme Rylan) and Maxie Jones (Kirsten Storms) talk about love, life, and employment as Lulu has some questions for Maxie about hers! As General Hospital viewers know, Peter August (Wes Ramsey) has been encouraging his girlfriend Maxie to branch out on her own, seeing her potential to run her own Crimson-like company.

She’s been handling everything Crimson the whole time that Sasha Gilmore (Sofia Mattsson) was in the hospital, and in Peter’s opinion at least, ran it better than her boss, Nina Reeves (Cynthia Watros)! Lulu asks Maxie if she’s leaving Crimson to branch out on her own!

It looks like Dev Cerci (Ashton Arbab) and Josslyn Jacks (Eden McCoy) are having a bite to eat at Kelly’s, as he completely confuses her by his choice of words, “Whatever happens” without clarifying the “whatever” that might happen!

Josslyn, obviously mystified by what he is referring to, asks him what that is supposed to mean! It sounds like Dev has either done something or made some plans to do so that he has kept secret, and that he may face some consequences because of it!

In the Corinthos kitchen, Carly Corinthos (Laura Wright) prepares to tell her mother, Bobbie Spencer (Jacklyn Zeman) about the baby’s birth defect, spina bifida meningocele. Carly won’t be able to cushion the blow very much from Bobbie, who is a nurse with many years of experience!

They really don’t know how bad the spina bifida meningocele, which is a birth defect where the spine is not completely enclosed and nerves, blood vessels and vertebrae can be enclosed in a sac on the outside of the body, will be until the baby is born, and Baby Corinthos will require immediate surgery to correct the problem if possible.

Peter August’s goon, Bryce (no last name given, portrayed by Brian Gross) is dressed as a prison guard and updates District Attorney Robert Scorpio (Tristan Rogers) that the prison warden says the transport of Shiloh Archer (Coby Ryan McLaughlin) from the courtroom is to be a two-man operation.

Robert obviously questioned why there were only two guards, Bryce and the prison van driver! As General Hospital viewers know, Peter tasked Bryce with the job of eliminating Shiloh; but will he succeed, or will Shiloh escape?

Will Port Charles forgive Brad for helping Nelle with the baby swap on #GeneralHospital? #GHhttps://t.co/OtbAGVhNab

Damian Spinelli (Bradford Anderson) apologizes to Peter for disturbing his phone call, saying it sounded serious! Peter will be concerned with exactly how much Spinelli heard, knowing that Shiloh put Peter on Jason Morgan’s (Steve Burton) radar and that Spinelli is more than Maxie’s ex-boyfriend and father of their daughter Georgie Spinelli (Lily Fisher), he’s Sonny Corinthos’ (Maurice Benard) and Jason’s go-to-guy for surveillance and computer systems hacking!

Elsewhere, Jason is talking to Samantha McCall (Kelly Monaco) and promises her that he is going to deal “with this person”. “This person” might be either Shiloh himself or someone else that Jason suspects of helping him!