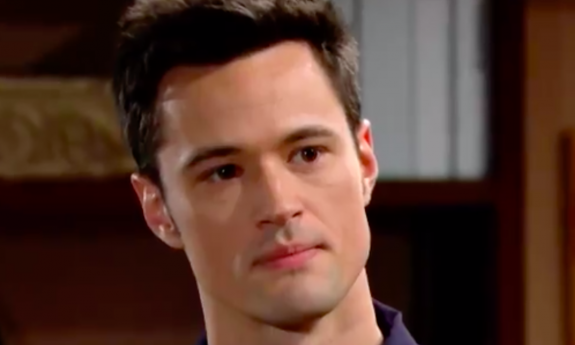 The Bold and the Beautiful spoilers for Friday, December 27, tease that Thomas Forrester (Matthew Atkinson) will set another of his devious plans in motion. As B&B viewers know, Thomas is determined to get Hope Logan (Annika Noelle) to keep working with him at Forrester Creations. He finagled it so that she’d ask him to be her designer for the fashion showdown by getting her to believe that he was interested in another woman.

Hope seems to believe that Thomas is genuinely interested in pursuing a relationship with Zoe Buckingham (Kiara Barnes), but she’s still skeptical about Thomas’ motives. It just wasn’t that long ago that Thomas was still obsessing over Hope, and Hope finds that difficult to forget. So, Thomas will decide that he needs to up his game a bit.

The Bold and the Beautiful – Hope Logan Fields A Big Request

According to B&B spoilers, Thomas will go to Hope with a big request. He’ll want her to keep Douglas Forrester (Henry Joseph Samiri) for the evening, while he goes out on a date with Zoe. And it appears that Thomas will follow through with the plan, as ongoing B&B spoilers say that he and Zoe will needed have their date.

In fact, B&B spoilers indicate that their date will be on the passionate side, with the two of them making love and spending the evening together. And since Hope will be caring for Douglas the whole time, she should be keenly aware that Thomas and Zoe spent the night together. One wonders whether this will ultimately convince Hope that Thomas has finally moved on.

Meanwhile, on Friday’s new episode of B&B, Sally Spectra (Courtney Hope) will be feeling invigorated. As B&B viewers know, she’s been enlisted by Steffy Forrester (Jacqueline MacInnes Wood) to be the designer on her new line geared toward the younger generation. Sally will be feeling up for the challenge and ready to put her talents to use.

Of course, there’s more than just designing going on here. As B&B viewers know, there’s a fashion showdown taking place, where Sally and Steffy will be competing against Thomas and Hope. It will be Steffy’s new line against Hope For The Future, and the competition will really be on.

The Bold and the Beautiful – The Fashion Showdown Is On

Well, it looks like the more that Sally and Steffy work on concepts for their line, the more emblazoned Sally will feel. Sally’s a pretty competitive person by nature, and she’ll really want to show up Thomas. We can’t forget that Thomas and Sally are exes, so there’s a lot going on beneath the surface here. A win would be important for Sally, both to solidify her place at Forrester and one-up Thomas.

The Bold And The Beautiful Spoilers: Filming Updates – Have Spouses Or Dolls…

The Bold And The Beautiful News Update: BLM And COVID Both Influenced Stories, EP…