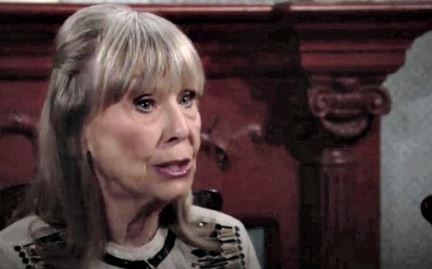 The Young and the Restless (Y&R) spoilers for Friday, December 27, tease that a heartwarming holiday episode’s on the way. At the Abbott mansion, Ashley Abbott (Eileen Davidson) catches up with Traci Abbott (Beth Maitland). They discuss Ash resolving her feud with Jack Abbott (Peter Bergman) before talk turns to Dina Mergeron (Marla Adams), who won’t be at their Society gathering tonight. It’d be pretty overwhelming for Dina in her current state.

The topic of Theo Vanderway (Tyler Johnson) and Kyle Abbott’s (Michael Mealor) tension also comes up. While Ashley and Traci chat, Billy Abbott (Jason Thompson) works on a business deal over the phone. Afterward, Billy shoots Amanda Sinclair (Mishael Morgan) a text to let her know he’s in town overnight. Jack Abbott (Peter Bergman) catches Billy off guard when he comes in next. He insists that Billy needs to come join the rest of the gang for dinner. 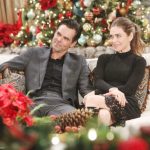 Once Billy vows to join the festivities, he reads a text from Amanda about getting Thai food. Billy gives Victoria a call and gets her voicemail before texting Amanda back about playing cards later. Meanwhile, Lauren Baldwin’s (Tracey E. Bregman) glum about Fenmore “Fen” Baldwin (Zach Tinker) not being home for the holidays. She’s at the coffeehouse with Michael Baldwin (Christian LeBlanc) when Fen calls and eventually reveals he’s there in the flesh.

After hugs are exchanged, Fen has a deep conversation with his parents about his issues. Things got pretty rough thanks to his relapse, but he’s at a halfway house now. Fen’s apologetic about letting Michael and Lauren down, but they’re proud that he took the steps to recover.

At Society, final preparations are made for the Abbotts’ Christmas Eve get-together. Abby Newman (Melissa Ordway) is on hand as Lola Abbott (Sasha Calle) and Kyle Abbott (Michael Mealor) bicker about Theo. Lola alludes to Theo having other plans for the evening, which leaves Kyle curious about how she knows. After Lola says she’s been texting with Theo, she advises Kyle to have some sympathy for him since he’s by himself on Christmas.

Jack arrives and brings the holiday spirit along with him. He’s in a festive mood, but Ashley worries when she learns Billy’s coming. She wonders if Billy knows she’ll be there and fears the merger was why he left Jabot. Once Jack reassures Ashley, the Baldwin family walks in and gets chatty with the rest of the party.

Billy pauses to look in on the joyful shindig before joining everyone. He congratulates Fen on his recovery efforts, so Fen talks about how he just couldn’t trust himself. Billy seems to relate to that and completes his work deal after Jack’s toast. Traci also has a special gift for each guest: advance copies of her new mystery novel.

Ashley speaks with Abby, who smiles as she talks about “Chance” Chancellor (Donny Boaz). Ashley can tell that Abby likes him. Billy gets another text from Amanda as he heads out. Kyle and Lola also choose to head home for some private holiday time together. Just outside Society, Michael and Lauren are moved when Fen offers a compass. It’s his present to symbolize how they always guide him.

Billy makes it back to the house and calls Victoria to tell her he’s going to bed. He considers texting Amanda again, but he ultimately just plays solitaire alone. At Kyle and Lola’s place, they reflect on disastrous gifts of the past before having a much better exchange. Lola loves her book of best restaurants, which includes a voucher. She gives Kyle his present, which is a framed photo of the Idaho stars – including their own – and the promise of a cabin stay that she booked for them.

Back at the Abbott mansion, Dina’s home and checks out the gifts under the tree. She learns they’re all for her and seems pleased. Later, Traci Abbott (Beth Maitland) sings O Come, All Ye Faithful and Dina surprises everybody by recalling the words. The rest of the fam joins in and they wish each other a merry Christmas.

The Young and the Restless spoilers say this is sure to be a touching episode! We’ll give you updates as other Y&R news and rumors emerge. Stay tuned to see what else is ahead in Genoa City.