The Bold and the Beautiful spoilers tease that Thomas Forrester (Matthew Atkinson) has that defining, sinister smile pasted on his face right about now. He’s delighted to be designing for Hope Logan (Annika Noelle), after circumstances caused the central focus of his life to reconsider working with him.

Liam Spencer (Scott Clifton) has preparations in place to safeguard the current love of his life. He’s asked the other woman who still occupies a portion of his heart, Steffy Forrester (Jacqueline MacInnes Wood), and Zoe Buckingham (Kiara Barnes) to keep watch over Thomas at Forrester Creations. They’ve reluctantly agreed, each for their own reasons.

Bold And The Beautiful Spoilers – Designing Personal Plans And Fashion

Thomas is, no doubt, a very talented designer. Some of his ability is seen in the illustrations that Douglas Forrester (Henry Joseph Samiri) creates. But, as viewers have also noticed, Thomas uses his mind for unproductive reasons.

Scheming to get Hope to marry him earlier this year worked. But Thope only lasted a handful of days and its forced creation included devastating effects on all parties involved, including Thomas.

The ending thought above is something Atkinson’s character still seems unable to recognize. In addition to all of the trouble he’s created for others, he’s also been damaged by his actions. 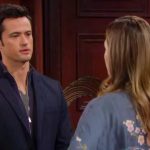 Hope isn’t buying that Thomas has suddenly become romantically interested in Zoe. This implies that Hope feels the hold she has over him is so powerful that no other woman could eclipse it. At the same time, Thomas knows Hope’s caution is justified.

Zoe doesn’t realize that she’s being used. Unless she’s playing Thomas in some form of revenge game and even considering her open willingness to spy for Liam, Zoe appears to be genuinely interested in Thomas. That’s surprising, but also adds a new wrinkle of intrigue into B&B’s evolving storyline.

Telling Vincent Walker (Joe LoCicero) that he was changing tactics in his quest to be with Hope was troubling to watch. Thomas is apparently incapable of keeping himself in check because, as Brooke Logan (Katherine Kelly Lang) and Liam know, he’s mentally unstable.

Thomas’ change in approach has him pretending to be interested in Zoe, while realizing daily workplace contact with Hope. At the same same he and Hope are co-parenting Douglas.

This long game projects to end badly. But plot twists have often impressed the audience, so maybe Thomas won’t upset everyone and ruin his life again?

Young and the Restless Spoilers: Phyllis Confesses To Nick And Distances Herself From Adam