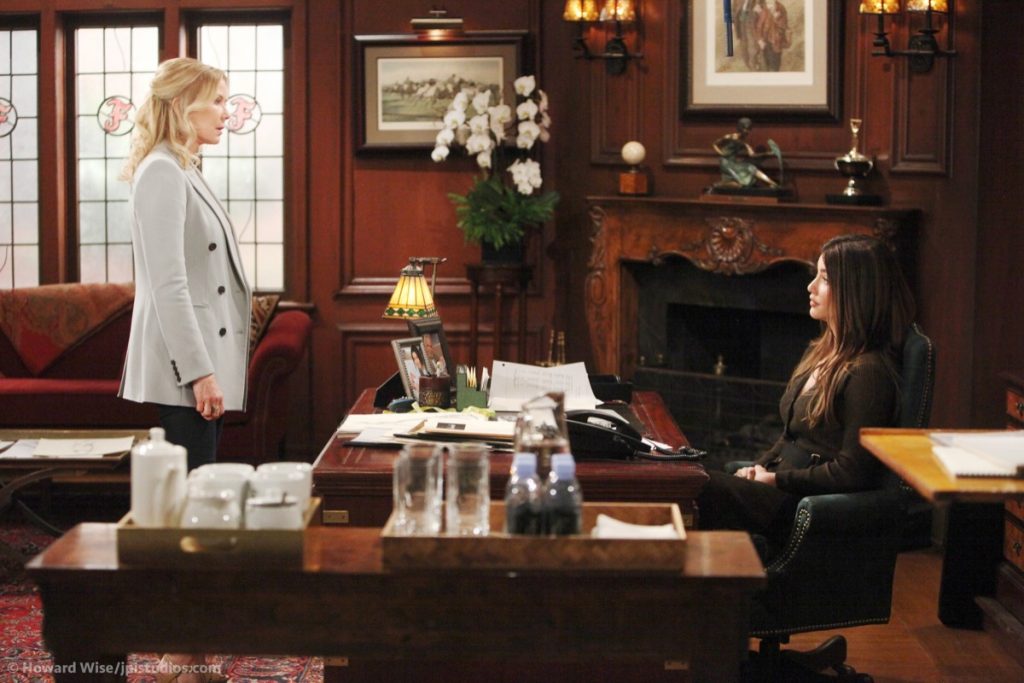 The Bold and the Beautiful spoilers for Thursday, December 26, tease that the action’s really heating up on the CBS soap. But before we get into that, we have a quick programming update. B&B will show a special encore episode on Wednesday, December 25th for the Christmas holiday, so the next new episode that viewers will see will be on Thursday, December 26th, and we’ve got the scoop about what will happen on Thursday right here.

First off, Steffy Forrester (Jacqueline MacInnes Wood) will continue explaining Liam Spencer’s (Scott Clifton) scheme regarding Thomas Forrester (Matthew Atkinson) and Zoe Buckingham (Kiara Barnes) to Brooke Forrester (Katherine Kelly Lang). As B&B viewers know, Liam has convinced Steffy to rehire Zoe at Forrester Creations so that Zoe can get closer to Thomas and find out what he’s really up to where Hope Logan (Annika Noelle) is concerned. 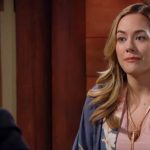 Well, Brooke was very interested in this scheme, and on Thursday’s episode, she’ll get some more details about the whole thing. She’ll be glad to hear that Liam shares her concerns about Thomas, but according to B&B spoilers, she’ll be upset that she was left out of the scheme, It seems that Brooke will want to be a part of the plot to bring Thomas down.

Of course, B&B viewers know that Brooke has been wanting Ridge Forrester (Thorsten Kaye) to wake up and smell the coffee when it comes to Thomas, but she’s had no hard proof that Thomas is all of the things that she accuses him of being. Brooke thinks that Thomas is pretending to be interested in Zoe so that he can manipulate Hope into working with him on her line…and she’s right about that.

Thomas is indeed working on his own angle in order to get closer to Hope. He decided that he needed a change in tactics in order to get Hope to work with him on her Hope For The Future line, so he essentially manufactured a “romance” with Zoe so that Hope would think that he has moved on and is no longer obsessed with her. The ruse worked, and now Hope has agreed to work with Thomas.

The Bold and the Beautiful Spoilers: Flo Fulton Is Back In Commission After Seven Week Hiatus https://t.co/6REO3chpzl pic.twitter.com/6OsDRWW0Jt

But Brooke’s not convinced that Thomas has really moved on, and so according to B&B spoilers she’ll deicide to get on board with Liam and Steffy’s plan to use Zoe, although she will warn Steffy that Zoe might have a difficult time outwitting Thomas. After all, Thomas is a master manipulator and seems to always be one step ahead of everyone.

It looks like Brooke will be happy about Steffy and Liam’s plan, but it will become clear pretty quickly that she and Steffy will hoping for drastically different outcomes. From Brooke’s perspective, she’ll want to find hard evidence that Thomas is still manipulating and obsessing over Hope. She’ll want proof for Ridge that Thomas hasn’t changed, and that he’s “sick” and needs professional help. It’s the only way she thinks she can save her marriage at this point.

But Steffy will be hoping for a very different outcome. Although she has her doubts about Thomas, she’ll be hoping that Zoe’s little investigation shows that Thomas really has moved on from his obsession with Hope and that he’s really changed. Of course, B&B viewers know that Thomas hasn’t changed at all, so Steffy will likely be disappointed.

The Bold and the Beautiful Spoilers Thursday, December 26: Brooke Gets On Board With Liam’s Plan – Blasts Liam & Steffy For Keeping Her Out Of The Loop