Hope Logan (Annika Noelle) became fixated with securing Douglas Forrester’s (Henry Joseph Samiri) legal rights on ‘The Bold and the Beautiful’. She did that minutes before sparking a confrontation with Thomas Forrester (Matthew Atkinson).

Liam Spencer (Scott Clifton) was taking care of ‘Lope’s’ baby, Beth Spencer (Madeline Valdez and River Davidson), while Hope was having a spaghetti dinner with Thomas and Douglas in Forrester Creations main office after hours. Yes, that wasn’t wise choice, as viewers saw.

Choosing to only tell Brooke Logan Forrester (Katherine Kelly Lang) that she was seeking partial custody of Douglas, with the intent of eventually gaining full custody, while not telling Liam is a trust-breaker. But Hope feels compelled to do whatever is necessary to shield Douglas from his father.

Thomas may have decided to pursue Hope while he and Douglas were still living in New York. It could eventually be revealed that Caroline Spencer’s (Linsey Godfrey) death was linked to his plan to return to Los Angeles, California, with Douglas and without the boy’s mother.

The above assumes the worst of Thomas, which is what Hope has chosen to do. Forgetting that she misconstrued the message he was trying to relay on the cliff earlier this year, before Brooke generated his fall off it, Hope reverted to the same mindset again this fall (wink).

Focusing intensely upon her self-created goal, Hope decided that she knows what’s best for Douglas. That fully discounts the roles that his blood relatives, Ridge Forrester (Thorsten Kaye) and Eric Forrester (John McCook) are now playing in Douglas’ life and arguably compares what Hope has been doing to what Thomas did when he was pursuing her. 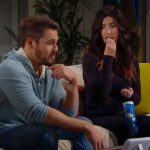 Hardcore viewers who experienced Thomas’ past behavior, meaning before Atkinson became the recast, were joined in awareness by newer viewers in recent months. During that time, Brooke and others referenced Thomas previous mentally unbalanced behavior, which included committing crimes against his brother, Rick (as most recently played by Jacob Young).

Fans witnessed modern mayhem following Thomas’ return to LA in March. His choice to use the information about Beth’s existence as a tool of manipulation, which included running Emma Barber (Nia Sioux) off Mulholland Drive to her death, clearly makes what he did infinitely worse than what Hope is doing now.

The point of comparison actually involves Hope’s means at times bordering the honesty line and at other times crossing it. regarding her recent interactions with Thomas. Like him, she also withheld important information, in this case as it relates to purposely not sharing what’s been happening with Liam.

Bold And The Beautiful Spoilers – Lope’s Reunion An Open Question

Thomas did not fight the annulment Hope requested. However, Hope didn’t remarry Liam after that legal matter was resolved.

B&B’s choice to leave Lope’s reunion open implied that drama was quickly approaching. Now that it’s arrived the audience is right to wonder how long, or if this couple survives.