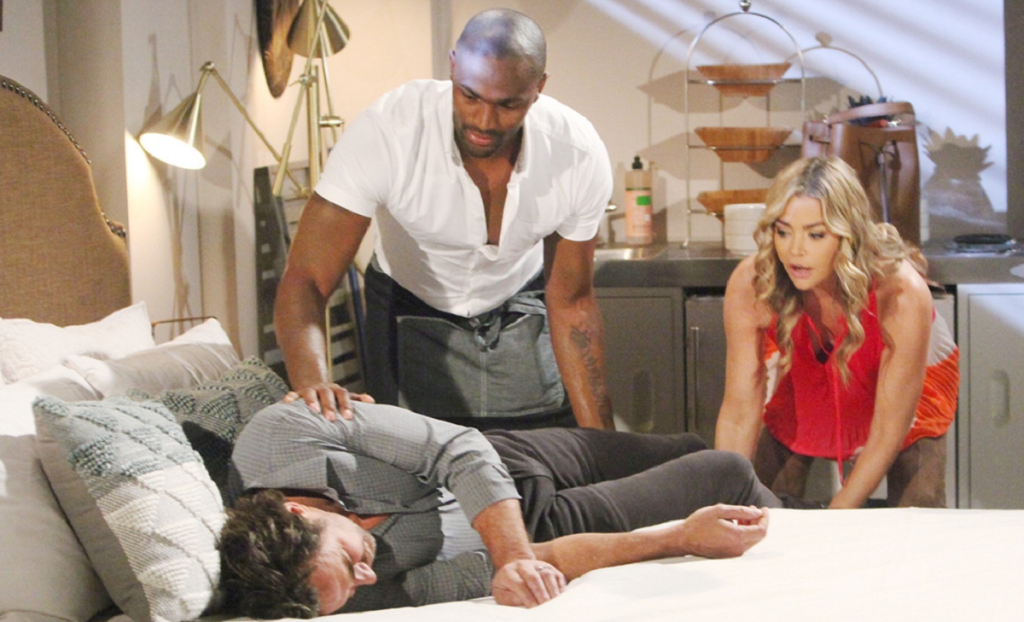 The Bold and the Beautiful (B&B) spoilers tease that Danny (Keith Carlos) the bartender at the Bikini Bar will blow up Ridge Forrester’s (Thorsten Kaye) life in a way that he never saw coming. And, the person that is behind it all is none other than Thomas Forrester (Matthew Atkinson).

Apparently, Thomas will approach Danny and will demand he “do the right thing” and let his evil stepmom know that his dad spent the night with Shauna Fulton (Denise Richards). It sounds like some heated drama is on the way. Here’s what you need to know about what’s coming up on B&B.

Somehow Thomas learns the scoop that Shauna and Ridge spent the night together. How the B&B spoilers aren’t sure yet. However, Thomas runs with this scoop and decides this is what he needs to end Bridge’s marriage. After all, if Brooke and Ridge break up, he will be able to see his son.

Bold And The Beautiful Spoilers – Danny Refuses To Help At First

At first, the bartender refuses to help Thomas. B&B spoilers state that he doesn’t want to get involved. Perhaps, he promised Shauna he would keep his mouth shut. But Bold and the Beautiful viewers know that Thomas is relentless, and he refuses to take no for an answer.

Danny finally agrees to help Thomas, but he will let him know that he doesn’t have a good feeling about it. He hopes that Shauna won’t be angry with him for betraying her trust.

As part of his agreement with Danny tells Brooke Logan (Katherine Kelly Lang) where Ridge spent the night when he was apart from her. Bold and the Beautiful spoilers state that Brooke is stunned. She cannot believe that Ridge would betray her with Shauna.

Bold And The Beautiful Spoilers – Brooke Forrester’s Anger An Understatement

To say Brooke will be angry is probably a gross understatement. She asked Ridge where he was and he never told her the truth. She will probably ask him again to see if he finally comes clean.

Bill and Ridge argue over Katie and puts the other Logan women in the middle. Can they get along for Katie's sake on #BoldandBeautiful?https://t.co/utzUQuhod1

Thomas hopes this will be the thing that ends his dad’s marriage to Brooke. Time will tell if Bridge can move past this. Thomas is on a mission to rid his family of the Logan family.

Do you think Ridge and Brooke can survive this bombshell? Don’t forget to come back later for more The Bold and the Beautiful (B&B) spoilers, news, and casting updates!

Days of Our Lives Alum Daniel Cosgrove Lands An Exciting Role — Get The Details!