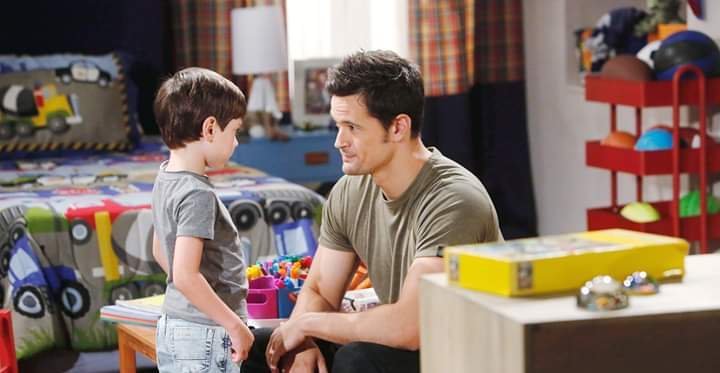 The Bold and the Beautiful spoilers for Thursday, September 26, tease that Ridge Forrester (Thorsten Kaye) will find himself frustrated. As B&B viewers know, Thomas Forrester (Matthew Atkinson) has just recovered from injuries sustained when he fell over the cliff at Steffy Forrester’s (Jacqueline MacInnes Wood) house. But on Thursday’s episode, Thomas will be out of the hospital and it looks like he’ll make a beeline to visit his son, Douglas Forrester (Henry Joseph Samiri).

Of course, as B&B viewers know, there are plenty of people in Douglas’ life who don’t want him around Thomas. Brooke Forrester (Katherine Kelly Lang) has made it perfectly clear that she doesn’t want Thomas anywhere near Douglas, and Hope Logan (Annika Noelle) feels the same way. Douglas has been living at Brooke and Ridge’s mansion since Thomas has been away, and he’s been spending a lot of time with Hope and Liam Spencer (Scott Clifton) down in the cabin.

But it seems that Thomas will sneak around and manage to see Douglas. According to B&B spoilers, Ridge will catch him visiting with Douglas and he’ll want to know what’s going on. It looks like the visit will definitely be against the rules that have been set up for Thomas since his release from the hospital, and Thomas will try to cover. But will Ridge buy Thomas’ excuse?

Meanwhile, on Thursday’s episode of B&B, Flo Fulton (Katrina Bowden) will experience some frustration of her own. She’ll have a lot on her mind, since she’s just learned that Sally Spectra (Courtney Hope) and Wyatt Spencer (Darin Brooks) are engaged. Plus, she learned that her aunt, Katie Logan (Heather Tom), is in the hospital with kidney failure. Flo will have a lot on her mind and will probably want to talk with her mom.

But Shauna Fulton (Denise Richards) will apparently have other things that she wants to talk about. As B&B viewers know, Shauna is still in heaven from her evening with Ridge. She and Ridge ended up spending the night together in the bedroom above Bikini Bar, and while nothing intimate happened between the two of them other than a stolen kiss by Shauna and some cuddling, Shauna can’t get the night out of her mind.

Bill and Ridge argue over Katie and puts the other Logan women in the middle. Can they get along for Katie's sake on #BoldandBeautiful?https://t.co/utzUQuhod1

B&B Spoilers – Are Shauna Fulton’s Fantasies Out Of Control?

She’ll apparently continue gushing about the night to Flo, which will be quite irritating for Flo. Plus, it will make Flo worry about where this all might go. After all, Ridge is a married man, and he’s married to Flo’s aunt, so Flo won’t want to see her mother cause problems in Brooke and Ridge’s marriage. Flo is really hoping that she can redeem herself with the Logans, and Shauna making a play for Ridge won’t help that cause any.

Look for Flo to try to talk some sense into her mother, although whether that will do any good at this point remains to be seen. Shauna appears to be quite taken with Ridge, and ongoing B&B spoilers indicate that she’s going to seriously pursue him, so don’t expect Flo’s words of caution to stick!