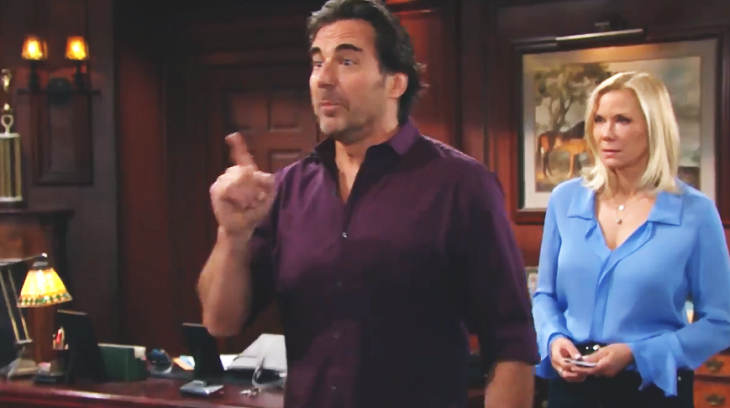 The Bold and the Beautiful recap for Wednesday, August 7 finds Brooke Logan (Katherine Kelly Lang) lashing out at Zoe Buckingham (Kiara Barnes) and Flo Fulton (Katrina Bowden) from keeping the secret about Baby Beth for so long to themselves.

It begins at the cliff house, where both Liam and Hope can’t believe that they have their baby back. Liam mentions all of the times that Hope held Phoebe but had no idea that she was really her biological child. Hope wants to know how this all happened. Liam says that her doctor lied and that he is responsible for taking their baby away and giving it up for adoption.

He also adds that Steffy Forrester (Jacqueline MacInnes Wood) and Taylor Hayes (Hunter Tylo) had no idea and that they still don’t know the entire truth. He also adds that Emma Barber (Nia Sioux) was on her way to tell Hope the truth before she died. Liam adds that it was Thomas Forrester (Matthew Atkinson) who might have caused her death.

Hope calls Liam her hero and also can’t believe that it was Douglas Forrester (Henry Samiri) who was the one who managed to tell the truth. Hope also recalls how odd it was when Shauna Fulton (Denise Richards) admitted that she had no idea her daughter Flo was pregnant. She also recalls when Shauna and Flo were talking about Beth behind her back. She can’t believe that so many people let her suffer for so long.

At Forrester Creations, Brooke is livid. She can’t believe that her granddaughter is alive and that Flo had lied to them this entire time. Flo tells her she’s sorry, but it’s not enough. Zoe is there and Brooke tells her that she just found out the truth.

She wants to know how Dr. Reese Buckingham was involved. Zoe is panicking and says that her own life was in danger and that her father had no choice but to pay off the gang members that were after him. Brooke doesn’t seem to care as she is getting even angrier by the minute.

Zoe is crying and says that they wanted to tell the truth but either someone or something kept on getting in the way. Brooke can’t believe that they allowed Flo to be a part of the family and is also angry at Zoe for letting this go on for so long. Brooke assures both of the women that they will pay for this.