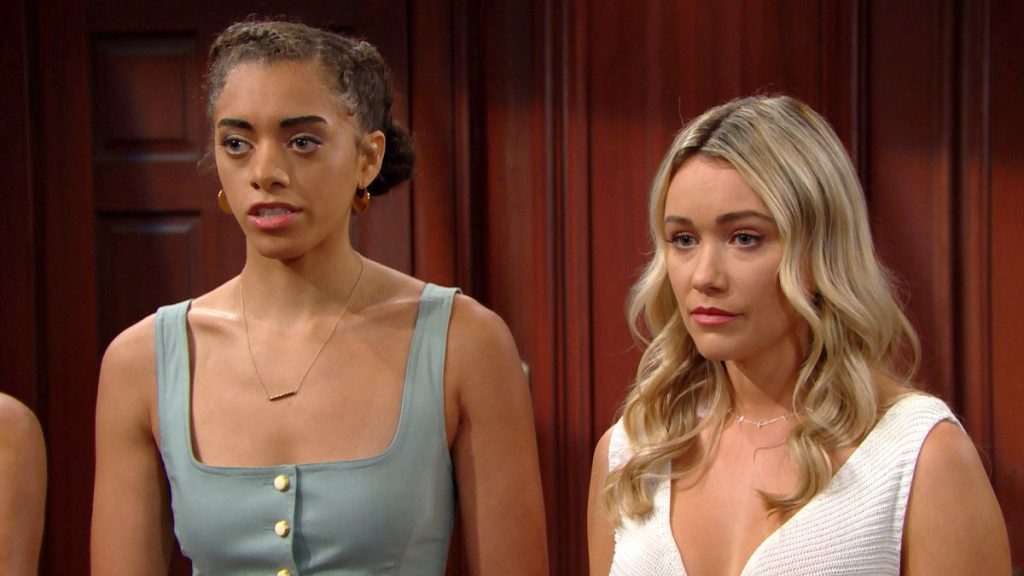 Ridge Forrester (Thorsten Kaye) issues a warning of his own for Flo Fulton (Katrina Bowden) and Zoe Buckingham (Kiara Barnes) while Sally Spectra (Courtney Hope) is surprised to see Wyatt Spencer (Darin Brooks) again. Here’s what you need to know.

It begins at Forrester Creations, where Brooke Logan (Katherine Kelly Lang) makes it known that she knew all along that Thomas Forrester (Matthew Atkinson) was up to no good.

Ridge is being dismissive and says that he first wants to make sure that Steffy is okay. He then gives Flo and Zoe a tongue lashing that they deserve and tells them both that they are guilty for keeping this secret to themselves.

Hope is there and also expresses concern about Steffy. Ridge takes Flo and Zoe’s keys and promises them that we will continue where he left off when he gets back.

At the design office, Sally is hard at work when Wyatt shows up. Wyatt admits right away that something happened between him and Flo but first wants to apologize to Sally for the way he treated her.

He admits that what Sally did wasn’t that bad and that he might have overreacted. Sally admits that she’s confused. Wyatt says that despite all of the chaos in his life right now, he wants her to know that she’s still very important in his life.

The Bold and the Beautiful Spoilers – Steffy Forrester Breaks Down

Back at the cliff house, Steffy looks like she’s about to have a mental breakdown. She can’t register the fact that Baby Phoebe has been Baby Beth this entire time and doesn’t get what’s going on. Liam Spencer (Scott Clifton) is there and says that he’s willing to get a genetic test done to make sure that Baby Beth belongs to him and Hope.

Liam also recalls how Taylor Hayes was so quick to give Steffy the money for the adoption. Steffy can’t believe that she was lied to this entire time. Hope says that she can’t wait to take Beth home so they can finally bond as a family.

However, Steffy bursts into tears and says there’s no way they are going to take Beth home, as this is the only home she’s ever known. Steffy wants Liam to intervene. Liam says that he and Hope are the baby’s parents but at the same time he knows how difficult this might be for Steffy.

Afterward, Brooke and Ridge arrive. Steffy tells Hope that she shouldn’t think about bringing her baby back to her house. Brooke points out that the adoption wasn’t legal. Hope is adamant that she is going to take Beth home and tells Steffy that she shouldn’t even dare stop her.

Don’t forget to come back for more The Bold and the Beautiful (B&B) spoilers, news, and casting updates!