General Hospital spoilers tease that there will be a lot of encouragement going on among the citizens of Port Charles as well as some shocking updates and drama in Monday, August 12th’s episode of General Hospital!

As General Hospital viewers should recall, Alexis didn’t see why she and Neil couldn’t at least remain friends, but he had said it was best they cut ties and go their separate ways! She asks Kevin, how many times can one person get dumped by their therapist? 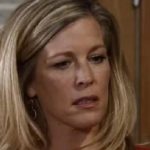 Lucy Coe (Lynn Herring) is talking to Kim Nero (Tamara Braun); she and Julian Jerome (William DeVry) had been dealing with Lucy about finding a house for the two of them to move into. Lucy must have found something that will be acceptable to both Kim and Julian, as she tells her when one door shuts, another one opens! Perhaps the first house – the old Dawn of Day house – went off the market and Lucy had something better come up.

It’s just as well, since the Dawn of Day house may have only served as more devastating reminders of her late son, Oscar Nero Quartermaine (Garren Lake Stitt) since he lived there for a short period of time when he was trying to get emancipation from Kim and his dad Drew Cain (Billy Miller) so he could make his own medical decisions.

Over at Charlie’s Pub, Kristina Corinthos-Davis is shocked when Julian informs her he’s selling it. Kristina asks in disbelief, “You’re selling Charlie’s?” Apparently, Lucy has found Julian and Kim something out of town – maybe even WAY out of town! Kim needed new scenery and a new start, and Julian loves her enough to go where she wants to go!

Meanwhile, over at General Hospital, Elizabeth Baldwin Webber (Rebecca Herbst) sits with her unconscious husband, Franco Baldwin (Roger Howarth) and encourages him to fight to wake up! As General Hospital viewers know,

Drew Cain (Billy Miller) and Curtis Ashford (Donnell Turner) were not able to reach the makeshift lab at 721 Dewitt in time to keep Dr. Arthur Cabot (Time Winters) from completing the memory transfer process of Drew’s pre-2012 memories into Franco! Even though she can’t be sure whose memories Franco will wake up with, he has to wake up before they know for sure and can talk to him!

Elsewhere, Josslyn Jacks (Eden McCoy) is obviously upset with Cameron Webber (William Lipton) for not making an important appointment. He is a little upset himself as he semi-snarks at her with the statement, “I was busy being kidnapped!” That gets Joss’s attention as she is shocked and exclaims, “My god!”

It looks like Sonny Corinthos (Maurice Benard) needs some encouragement about something too! Carly Corinthos (Laura Wright) looks very concerned as she tells Sonny, “You can do this! And I’m going to be right beside you!”