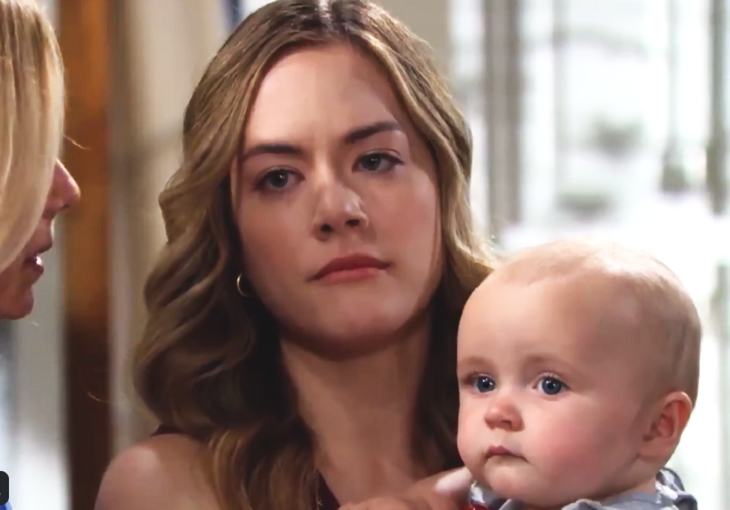 The Bold and the Beautiful spoilers for Friday, August 9, tease that Steffy Forrester (Jacqueline MacInnes Wood) will face complete devastation.

Steffy may resist the truth, since accepting it as fact will mean that she’ll ultimately have to give up little girl she’s considered to be her daughter for months now.

She still thinks of Beth Spencer (River Davidson and Madeline Valdez) as Phoebe, and it’s going to take her some time to process everything and finally accept that she’s going to have to let Beth go.

Bold And The Beautiful Spoilers – Ridge Forrester Lashes Out

Brooke was immediately outraged to hear that Thomas had married Hope knowing that Beth was alive and kept it from her, but Ridge instantly disbelieved that his son could have been involved. Ridge simply doesn’t want to believe that his son could do what Zoe and Flo claimed, and it appears that he’ll maintain the belief that they’re lying.

According to B&B spoilers, Ridge will let Zoe and Flo have it, and he’ll vow to make them pay for the lives they’ve destroyed. He’ll be thinking in particular about the effect that losing Beth will have on his daughter Steffy Forrester (Jacqueline MacInnes Wood). He knows that Steffy will suffer terribly when she has to turn Beth over to Hope and Liam.

Bold And The Beautiful Spoilers: Hope And Liam Blissful In The Beth Reveal Afterglow https://t.co/sxN2qLeouk pic.twitter.com/41NZuwY8Kv

Finally, on Friday’s new episode of B&B, Brooke Forrester (Katherine Kelly Lang) and Ridge will make their way to the cliff house, but they’ll have very different reasons for wanting to be there. Brooke will want to support Hope and help her celebrate the great news about Beth being alive. But Ridge will want to console Steffy and help her through this difficult time.

It looks like things will get difficult as Brooke gravitates to Hope and Ridge gravitates to Steffy. It seems that everyone will realize that Hope wants to take her daughter home with her. According to B&B spoilers, it won’t be long before Hope and Steffy are arguing over Beth, and Brooke and Ridge take the predictable sides.

Look for some tense moments as Brooke supports Hope in the belief that Beth should come home with her. It looks like Steffy will fight back and balk at the idea of Beth leaving the only home she’s ever known, and Ridge will support her in that belief. It may turn into a standoff, but ultimately someone will have to give in this situation.