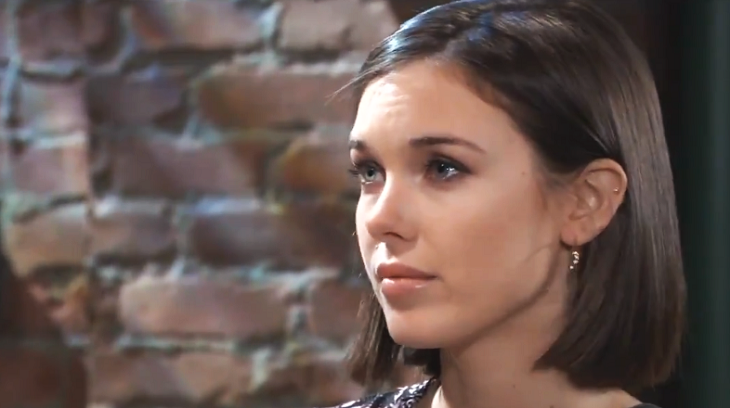 She is the birth mother of the child she thinks was adopted by Lucas Jones (Ryan Carnes) and Brad Cooper (Parry Shen). Michael Corinthos (Chad Duell) thinks the child is his baby cousin by adoption. But Wiley Cooper Jones (Eric and Theodore) is really his own son with Nelle Benson (Chloe Lanier).

Michael has observed Willow around Wiley a few times, and may suspect she’s his birth mother already. He doesn’t know the baby isn’t dead (although actually the real baby, who was swapped for Jonah between Nelle and Brad, is dead).

But he still may suspect that he’s alive and Wiley is hers just by the way she acts around him. Although he keeps his suspicions to himself, knowing the same behavior could be observed in any mother who has recently lost a child.

Willow is a lot more emotional with Wiley than say, Nina Reeves (Michelle Stafford) would be, but maybe that’s just Willow’s personality. She is a teacher who works with young children so maybe it’s her nature to love them and be affectionate with them, and especially babies.

General Hospital Spoilers – The Truth Will Eventually Come Out

If Willow tells Chase she knows who her baby is and who adopted him, he may question why she would have this information. But he knows why she gave him up and how worried she is about Shiloh getting to him. So he may figure that is why she made it her business to know.

If she tells Michael, he may wonder the same thing if she tells him what she confessed to Chase, that her baby (as far as she knows) didn’t really die and who he is, and that Shiloh is the birth father. He will understand why she is worried and why she confessed to him. Michael then will be extra protection for Wiley.

Willow will be in for a devastating shock when the baby swap story eventually comes out. But as the saying goes, “the truth will come out!” She may be in for a double shock if she finds out she was adopted and who her own birth mother is.

Days of Our Lives Spoilers: Maggie And Victor At War Over Holly’s Death