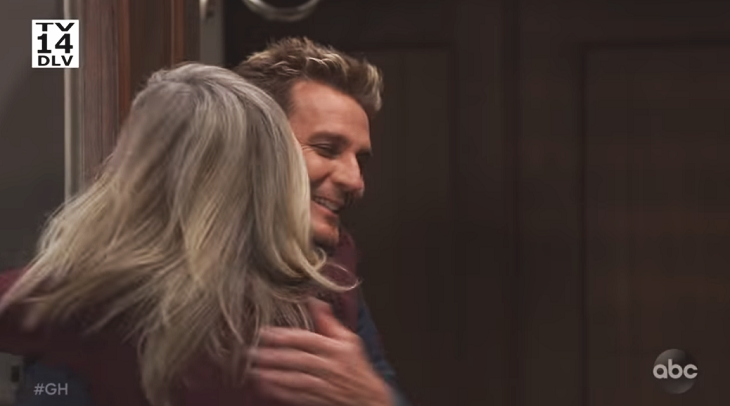 This week’s General Hospital promo promises an exciting week with a return, an interruption and yet another beat down. It’s all in a days work for our GH favorites.

General Hospital’s corporate raider himself, Jasper Jacks (Ingo Rademacher) is back in town at the request of his daughter Jocelyn Jacks (Eden McCoy). Jax and Sonny Corinthos (Maurice Benard) are together, and the tension could be cut with a knife.

However, Sonny knows that Joss needs her father. Of course, Sonny’s “just peachy” reply when Carly Corinthos (Laura Wright) asks how they are getting along shows the animosity hasn’t gone anywhere.

General Hospital Spoilers – Will They Keep The Peace?

Will Sonny and Jax keep the peace for the sake of Carly and her unborn baby’s health? Is Jax there for Jocelyn or does he have something else in the works as well?

General Hospital’s Robert Scorpio’s (Tristan Rogers) timing leaves a lot to be desired when he once again comes between Anna Devane (Finola Hughes) and Hamilton Finn (Michael Easton). Is Robert trying to return Anna’s engagement ring to Finn or is he hell-bent on coming between them?

Robert claims to want to stick around to help Anna, but if his actions are any indication, he wants Anna for himself and will do whatever he can to prove to Finn that he’s the wrong man for Anna. Who will end up with Anna in the end?

General Hospital’s Shiloh Archer (Coby Ryan McLaughlin) is determined to get Sam McCall (Kelly Monaco) in his Dawn Of Day Trust and his bed. Jason Morgan (Steve Burton) has other ideas, and just as Shiloh attempts to make a move on Sam in his attic lair, Jason will come to the rescue.

Jason breaks down the door, and just as Sam asks if Shiloh hears anything, Jason clocks him with the butt of his pistol. Will Jason’s latest attack on Shiloh land him in hot water with the D.A. or worse?

Whose side will Sam take in this latest confrontation? Shiloh believes he is the law in Port Charles, will that turn out to be true? This week’s GH promises to be full of “edge of your seat” moments that fans don’t want to miss!

Days Of Our Lives Coming And Goings: Thaao Penghlis And Leann Hunley To Return