Days of Our Lives Spoilers: Maggie And Victor At War Over Holly’s Death 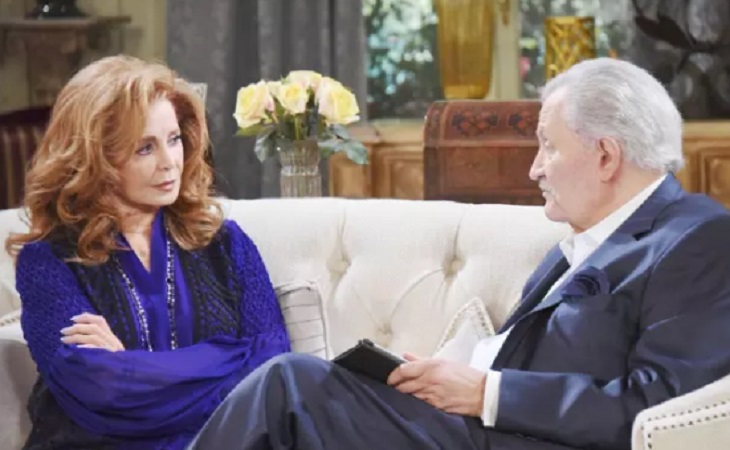 Days of Our Lives spoilers tease that Maggie and Victor Kiriakis (Suzanne Rogers, John Aniston) will have a huge falling out over various conflicts, including Victor’s blaming of Nicole Walker (Arianne Zucker) for the kidnapping and presumed death of Maggie’s granddaughter, Holly Jonas (Scarlett and Harlow Mallory).

Maggie is also not happy with Victor’s decision to rehire Kate Roberts DiMera (Lauren Koslow) at Titan. Maggie had warned him before that she didn’t trust Kate, and that she had caused great harm to the company before.

As far as Victor’s blaming Nicole for the tragedy that appears to have befallen little Holly, he doesn’t even want to go there trying to explain his rationale to Maggie, and certainly not to Nicole, unless he has bodyguards around him, as either woman would be ready to strangle him at this point, and Sarah Horton (Linsey Godfrey) may well join them, because how cruel and callous can someone be as to blame a mother for a tragedy that befell her own child when she herself has only made it back to town after being presumed dead for several months?

In the latest #DAYS, the search for Holly takes a tragic turn. https://t.co/ZsCmioRrzb pic.twitter.com/qvDljVpvzU

There are so many situations and so many things going on, that Maggie is starting to have a hard time coping with life itself, let alone with bad business decisions and callous judgments by her husband!

Even though her grandson, Parker Jonas (Christian Ganiere) is close by and alive and well, she doesn’t get a lot of time with him because of Victor’s attitude towards Chloe Lane (Nadia Bjorlin); and she became much more bonded with Holly than Parker because she took care of her for several months and transferred her love for her late son, Daniel Jonas (Shawn Christian) to Holly, so now she is doubly grieving.

Days of Our Lives Spoilers – Maggie At The Tipping Point

Maggie is at the tipping point and as other Days of Our Lives spoilers tease, at the “tipping point” as well as she is in danger of losing her sobriety because of all the stress and grief over Holly, and with these other stressors as well, she is poorly equipped to put up with Victor’s “bullstuff”!