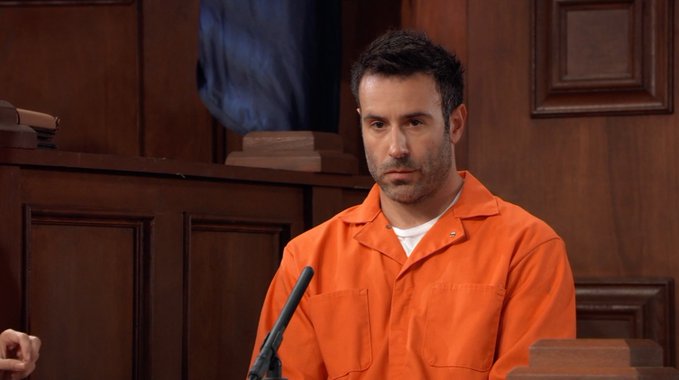 General Hospital spoilers tease that there are five key takeaways GH fans should look for during the week of Monday, September 23 through Friday, September 27.

General Hospital viewers will recall from Friday, September 20th’s episode that Shiloh Archer (Coby Ryan McLaughlin) escaped, and pulled over Bobbie Spencer (Jacklyn Zeman) dressed as a cop. There is a good possibility that Wiley Cooper-Jones (Erik and Theodore Olson) is in the back seat, because something that looked like a baby seat covered with a blanket could be seen in Monday’s preview and also in a sneak peek, “Shiloh’s Loose”.

Shiloh takes off with Bobbie’s car, leaving her stranded on the side of the road after she recognizes him! Shiloh may have been only looking for a getaway but perhaps winds up with a baby bonus! Detective Harrison Chase (Josh Swickard) will take time to comfort Willow Tait (Katelyn Mac Mullen) and later in the week Michael Corinthos (Chad Duell) and Willow will cross paths, while Brad Cooper (Parry Shen) apologizes for his misdeeds. Shiloh will be reluctant, and that may have to do with turning the baby back over.

There will be trouble aboard the Haunted Star, possibly connected to Shiloh’s escape. Sam McCall (Kelly Monaco) will rush to the Haunted Star, and Jason Morgan (Steve Burton) will try to reach her, the implication being that he is unable to. Chase will head to the docks, probably with Jason tagging along, and Sam will be trapped; later, Chase will bring a stretcher to General Hospital and Jason will give Commissioner Jordan Ashford (Briana Nicole Henry) his statement.

Viewers will also recall from a recent episode that Jason tasked Damian Spinelli (Bradford Anderson) with finding out if there was any prior connection between Peter August (Wes Ramsey) and Shiloh, other than Peter’s getting an interview with Shiloh. Dr. Hamilton Finn (Michael Easton) will also meet with Peter and hopes he can answer some questions Finn has for him, and later Peter will collect some money. Maxie Jones (Kirsten Storms) will also meet with Spinelli, and later Mayor Laura Webber (Genie Francis) will thank Peter for something. Peter had put a hit out on Shiloh in previous episodes, but it looks like his plans for Shiloh didn’t work out in the way he had hoped they would!

General Hospital viewers will recall that Kim Nero (Tamara Braun) and Franco “Frankendrew” Baldwin (Roger Howarth) gave into their passions and had sex in last week’s shows and Elizabeth Baldwin (Rebecca Baldwin) nearly walked in on them with their pants down! The two were planning to run away together and met at the docks, but Franco was met with mental health personnel who gave him a shot and took him away for a 48-hour psych hold initiated by Liz and Scott Baldwin (Kin Shriner)! Kim will be frantic, and later in the week Liz will tell her stepson Cameron Webber (William Lipton) about Franco.

Carly Corinthos (Laura Wright) goes to General Hospital, and it’s possible that the stress over her mother Bobbie’s situation and a possible Wiley kidnapping could have put her into premature labor, although she did tell her mother prior to being left stranded on the side of the road after Shiloh stole her car that she was having a c-section and the time was very near. Carly may just be going to the hospital on her planned due date to have her and Sonny Corinthos’ (Maurice Benard) baby. This will happen on Friday, so it will probably be the Friday cliffhanger!

That’s all for this week’s Five Key Takeaways From General Hospital. Stay tuned to the show and keep checking General Hospital spoilers frequently for all the latest news, updates and developments!