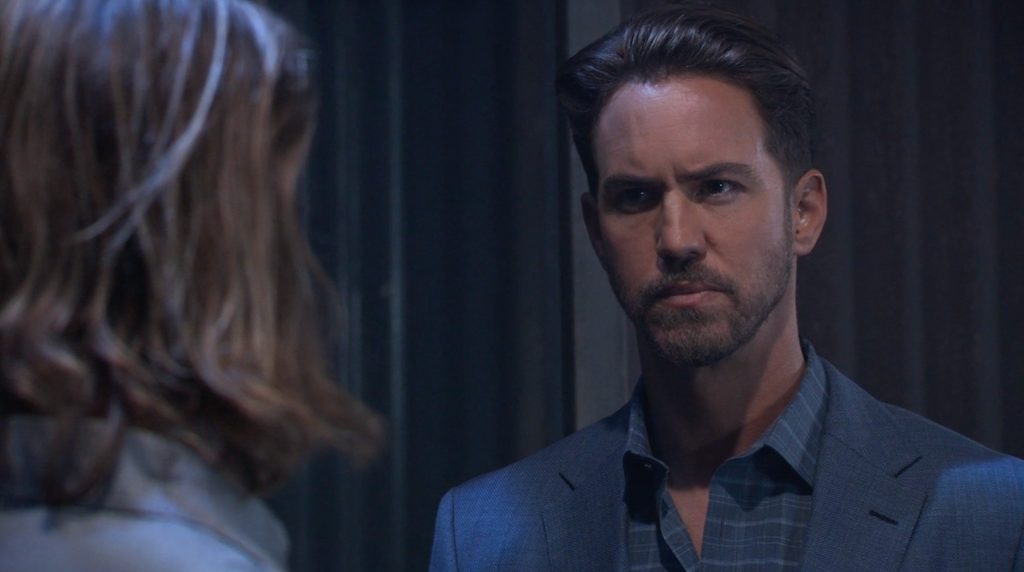 Dr. Hamilton Finn (Michael Easton) has some questions he would like answered from Peter August (Wes Ramsey). Usually when Finn and Peter talk it’s about Peter’s mother, Anna Devane (Finola Hughes) but maybe it’s about something different this time; maybe Finn wants to know if Peter knew anything about Cassandra Pierce (Jessica Tuck) back in his Heinrik Faison days. General Hospital viewers will have to tune in Monday and see exactly what Finn wants to know from Peter!

GH Spoilers – Franco Baldwin Has A Warning For Elizabeth Baldwin

Franco Baldwin (Roger Howarth), firmly believing that he is pre-2012 Andrew Cain (Steve Burton) because of the memory transfer done on him, tells his wife Elizabeth Baldwin (Rebecca Herbst) that he belongs to Kim Nero (Tamara Braun) and that Liz has no claim on him!

That must be tough for Liz to see coming out of her husband’s mouth, but she will have to remember that’s not who he is inside right now. Viewers will recall from last week’s episodes that Liz nearly caught Franco and Kim with their pants down, coming to Kim’s apartment right after she and Franco got done having sex! 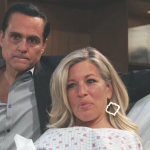 Over at Kim’s apartment, her serious boyfriend Julian Jerome (William DeVry) has some questions for Kim. Kim and Julian were supposed to be moving to Manhattan together but instead she would have run off to parts unknown with Franco, rather with “Frankendrew” had the mental health people not intercepted him in time at the docks! Kim will tell “Charlie” much the same story that Franco told Liz, and admit that she and “Frankendrew” had sex; Julian will be heartbroken!

Elsewhere, Josslyn Jacks (Eden McCoy) seriously misunderstood some brochures she found on the counter in the Corinthos kitchen, which were meant to concern Dev Cerci, (Ashton Arbab) not herself. She is very upset as she tells her father, Jasper Jacks (Ingo Rademacher) that her mom, Carly Corinthos (Laura Wright) and stepfather, Sonny Corinthos (Maurice Benard) wants to send her away to boarding school!

Meanwhile, Carly updates Sonny, and she is probably talking about their baby due to be born very soon. She had chickened out of telling her mother, Bobbie Spencer (Jacklyn Zeman) about the baby’s condition found in prenatal screenings, spina bifida meningocele. Carly tells Sonny that the condition hasn’t changed.

Unknown to Carly and Sonny, Shiloh Archer (Coby Ryan McLaughlin) has escaped police custody and pulled Bobbie over for a speeding ticket in the middle of nowhere, and stole her car!

Now Bobbie is without cell phone and is standing out at the side of the road and screaming for help! Viewers will recall from Friday’s episode that Detective Harrison Chase (Josh Swickard) is aware and had told Jason Morgan (Steve Burton) and Samantha McCall (Kelly Monaco). Perhaps the dragnet put out for Shiloh will send a real cop her way for rescue!