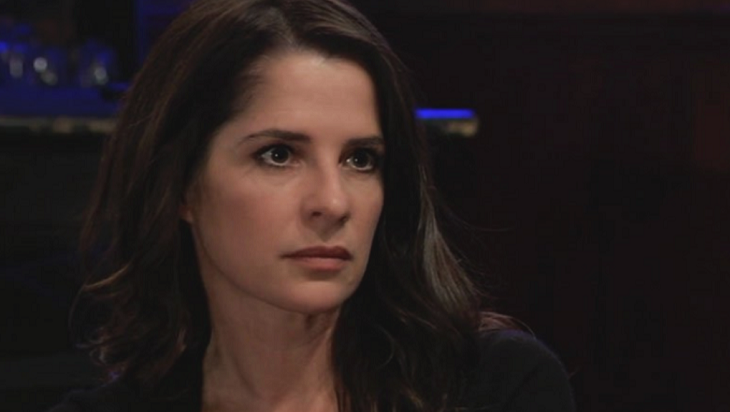 General Hospital spoilers tease that Sam McCall (Kelly Monaco) will be interrupted this week on General Hospital. Will she be caught red-handed rifling through the Day of Dawn office files? Monday’s preview shows she’s being asked what she is doing, is it possible she talks her way out of that incident and then tries again Wednesday but is caught farther along in the process?

General Hospital viewers know that Sam is trying to intercept her sister Kristina Corinthos-Davis’ (Lexi Ainsworth) trust statement from Shiloh Archer (Coby Ryan McLaughlin) to find out exactly which family secret she told. She also wants to prevent Shiloh from using it against Kristina or the family members involved. She may be too late. He may have already started the wheels in motion.

As longtime General Hospital viewers should remember, Alexis was so distraught she bypassed calling 911. She scooped up Kristina, put her in the back seat of her own car and sped her off to GH.

It was during this trip to GH that she ran over Kiefer and kept going. Later Sam herself and Molly Lansing-Davis (Haley Pullos) came across an unconscious Kiefer in the ditch and got him to GH also. Kiefer died from his injuries.

Later, Alexis confessed the hit and run to Mac Scorpio (John J. York), who was police commissioner at that time but he dropped the charges.

General Hospital Spoilers – Shiloh Archer May Be Way Ahead

Even if Sam is unable to retrieve Kristina’s trust statement due to it having been removed by Shiloh or someone else at Dawn of Day, it was also recorded. Sam may be able to get the recording, but Shiloh may be way ahead of her.

Other General Hospital spoilers tease that Mac will be livid about something the very next day, and it could be because he’s being questioned about why he dropped the charges against Alexis.