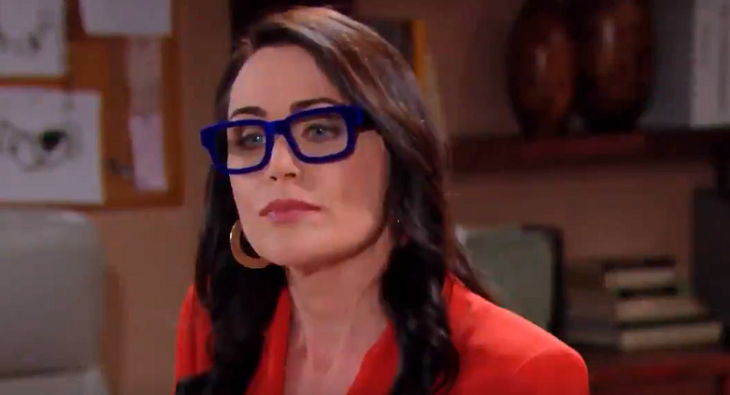 The Bold and the Beautiful spoilers tease that Quinn Forrester (Rena Sofer) will be on a mission. She’s got it in her head that she wants her son Wyatt Spencer (Darin Brooks) together with his old high-school flame Florence “Flo” Fulton (Katrina Bowden), and nothing will stop her from making that happen.

There’s just one thing standing in the way: Sally Spectra (Courtney Hope), who is currently in a serious relationship with Wyatt.

But Sally’s just a detail to Quinn. According to B&B spoilers, Quinn will set out to destroy Sally and Wyatt’s relationship in order to pave the way for Wyatt and Flo to get together. And she’ll get pretty sneaky and conniving in her attempts to reach her goal. Quinn’s definitely a meddler, and she’ll put her meddling skills to use during the coming week.

Bold And The Beautiful Spoilers – Quinn Forrester Is Spying

The whole thing will be innocent, but at the end of their conversation, the exes will hug. Quinn will decide to use that tidbit of information to her advantage. She’ll confront Sally and question her loyalty to Wyatt.

She’ll also run to Wyatt and tell him that she spotted Sally and Thomas in a compromising position. But it looks like Wyatt will see through his mom’s attempt to cause trouble, and he’ll shrug off the hug, since he trusts Sally.

Bold And The Beautiful Spoilers – Wyatt Spencer Will Lose It

But Quinn won’t stop there. The Bold and the Beautiful spoilers say that Quinn will swoop in and confront Sally about her living situation with Wyatt. Exactly what Quinn will take objection to remains to be seen.

She may insinuate to Sally that she is freeloading off of Wyatt. Whatever she says will lead to an argument between Quinn and Sally, and it won’t be good.

Bold and the Beautiful’ POLL: Will Flo Voluntarily Tell Her Secret, Or Could The Baby Swap Be Forced Out? https://t.co/lzhUJ6MZho pic.twitter.com/oyqSkttWIz

We’ll see what else Quinn does going forward to cause conflict for Sally and Wyatt, but she certainly seems determined to create friction and turmoil for the couple. And it looks like she’ll have some success at that. Do you think that she’ll succeed in breaking up Wally?

Young And The Restless Poll: Will Summer, Lola Or Both Dump Kyle? Vote Now!