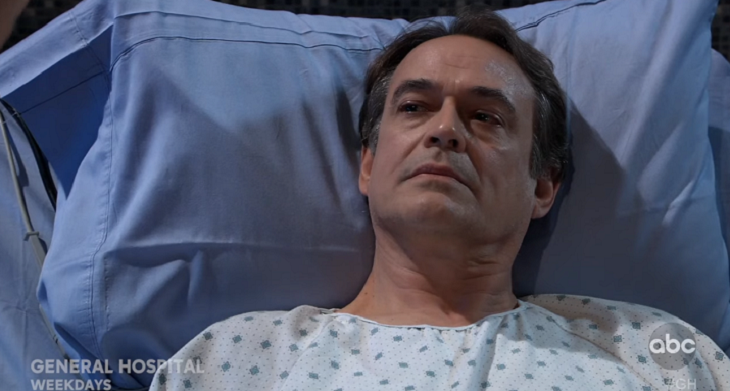 General Hospital (GH) spoilers tease that Dr. Kevin Collins (Jon Lindstrom) must not be the one who drugged his twin brother Ryan Chamberlain (Jon Lindstrom) in Tuesday’s episode.

Producer Frank Valentini had tweeted a question about who drugged Ryan in the episode, and portrayer Jon Lindstrom tweeted back that he’d like to know too! Obviously, if Jon himself didn’t play the part of the culprit, who did?

General Hospital official spoilers also said that Kevin would pull a fast one; what is the fast one he pulled if it wasn’t injecting Ryan’s IV with the seizure-causing drug?

This episode and Monday’s as well seemed to be rife with red herrings and false leads surrounding this question! In Monday’s episode, Kevin received a phone call to which he responded, “I know. It’s ok…it’s better this way.”

Dr. Hamilton Finn (Michael Easton) and Curtis Ashford (Donnell Turner) discussed forging Ryan’s signature but making sure he didn’t wake up after harvesting the kidney! Franco Baldwin (Roger Howarth) was seen by Cameron Webber (William Lipton) throwing away some gloves like the person who put the seizure-causing drugs in Ryan’s IV shortly afterward. Roger Howarth doesn’t participate in social media, but neither Michael Easton nor Donnell Turner gave any clues on theirs!

Finn, however, acted a little suspicious when he explained Ryan had an allergic reaction to one of his meds when he came to make the announcement about Ryan to the Ashfords; he looked everywhere but directly at them when he said it!

His brother, Detective Harrison Chase (Josh Swickard) would find that very suspicious, although his partner, Detective Valerie Spencer (Paulina Bugembe) who was standing guard at Ryan’s hospital room door, didn’t seem to flinch when Ryan started seizing! Whoever did it would have had to pass right by her!

General Hospital Spoilers– What Is The ‘Fast One’ Kevin Pulled?

Could they all be in cahoots to get Jordan Ashford (Briana Nicole Henry) a kidney? Even Elizabeth Baldwin (Rebecca Herbst) who helped stabilize Ryan when he was seizing, got an interesting response out of Franco when she told him he had a seizure. The topic of conversation changed to his hero award for helping expose Ryan, and Franco responded that sometimes the ends justified the means!

Jordan's making peace with the people she needs to say goodbye to. Is this the end for her?
An emotional, new #GH starts RIGHT NOW on ABC! @Bri_Nic_Henry pic.twitter.com/zQvBfknSVr

The other question remains as to just what was the “fast one” that Kevin pulled in Tuesday’s episode if it wasn’t drugging Ryan?

Another intriguing question is, where was Kevin exactly when Finn notified the Ashfords about Ryan’s seizure? Didn’t anyone let Kevin know that his twin brother had a seizure? When in his hospital room, Finn had prepared to take Ryan to get an MRI to make sure there was nothing wrong with his brain (other than the obvious) that could have caused the seizure!

Franco's up to something and Cameron might be the only person able to stop him from getting away with it.#GH is brand-new and STARTS NOW on ABC! #RogerHowarth pic.twitter.com/kMbktk67C4

Could Kevin have pulled a switch when Ryan was taken for his MRI and signed the donation papers in his place, or could he or Finn have tricked Ryan into agreeing to give Kevin a medical power of attorney off-screen in case Ryan slipped into a coma?

That could be what Kevin was talking about on the phone, or he could have been in on the injection of Ryan’s IV even if he didn’t do it himself. If Ryan had signed the medical power of attorney allowing Kevin to make medical decisions if he were incapacitated, then Kevin could have been signing for Ryan to donate the kidney with none of the Ashford family being the wiser!

We’ll just have to wait and see if Ryan lives through the harvesting of the kidney to know for sure! Stay tuned to General Hospital and keep checking GH spoilers frequently for all the latest news, updates and developments! As always, more detailed Spoilers and Breaking news will appear here on Soap Opera Spy!