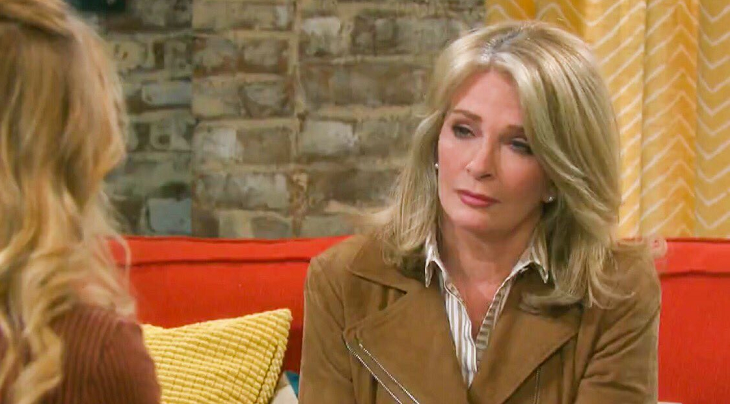 Days of Our Lives (DOOL)  spoilers tease that Dr. Marlena Evans (Deidre Hall) will be forced to call her daughter Sami Brady DiMera (Alison Sweeney) and give her the dire news about her son Will Horton (Chandler Massey).

His father, Lucas Horton (Bryan Dattilo) will be called as well, possibly by either Sami, Marlena, or his mother Kate Roberts DiMera (Lauren Koslow). Up till now, Will hasn’t wanted to worry his parents about his benign brain tumor, apparently caused by side effects of Dr. Wilhelm Rolf’s (William Utay) amnesia serum, although there also could be contributing factors from the resurrection serum used on Will earlier, as other Days of Our Lives spoilers tease.

Will and his partner, Sonny Kiriakis (Freddie Smith) were given the heartbreaking prognosis by Dr. Kayla Johnson (Mary Beth Evans) in a recent episode of Days of Our Lives that the tumor, in spite of it being benign, in other words not cancerous, was growing at a rate that could kill Will in a matter of days! 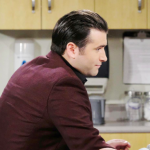 So when Will tells his grandma Marlena, of course, she’s going to call and let his mother know! No one knows the first airdate for Sami and Lucas to show up on Days of Our Lives, but viewers can expect them to show up fairly soon considering the dire nature of the tumor prognosis!

Unfortunately, Lucas, Sami, Sonny, and Will’s grandparents on both sides have had to face his death once before, when Ben Weston (Robert Scott Wilson) was still mentally ill as the Necktie Killer, but that time Rolf brought Will back to life with a resurrection serum. It was a long path back to Salem and regaining his memory, but he was found to be with Susan Banks (Eileen Davidson) in Memphis, and discovered by Paul Narita (Christopher Sean) and later proven to be Will Horton and not a doppelganger.

He was brought back to Salem and the amnesia serum was given to him; his memory started to come back, but Will was impatient to get his whole memory back quickly and got into the supply of it and took all the serum that had been compounded!! It could be the excess that caused the side effect tumor, but without the diary, formulas, and notes that Xander Kiriakis (Paul Telfer) now has, Will’s chances are slim to none!

Will Lucas and Sami come to Salem to witness a miracle for Will, or will it be a sad goodbye?  Stay tuned to Days of Our Lives and keep checking Days of Our Lives spoilers frequently for all the latest news, updates and developments! As always, more detailed Spoilers and Breaking news will appear here on Soap Opera Spy!