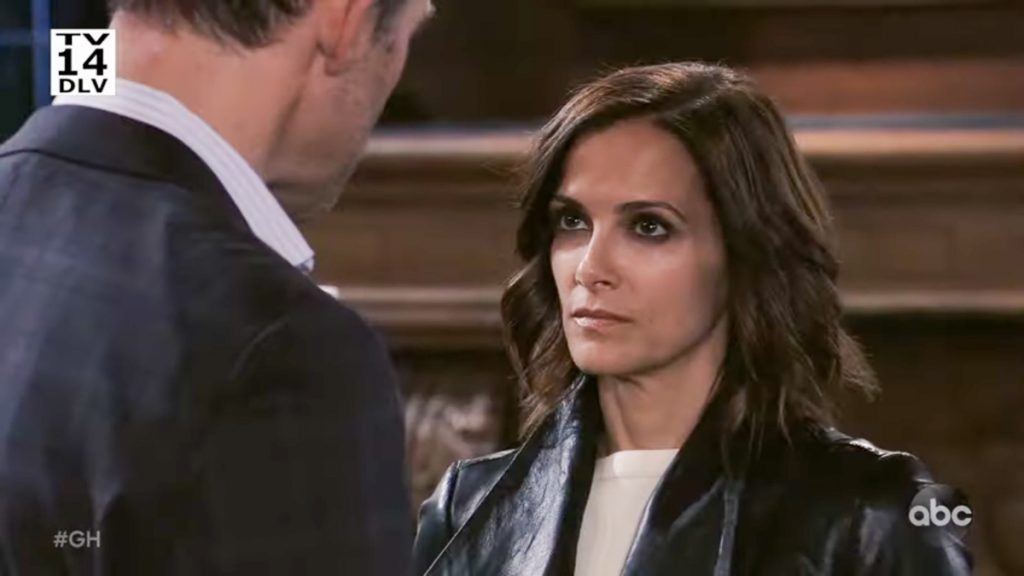 General Hospital spoilers tease another exciting day of drama for GH fans on Tuesday, November 19 as several long-running storylines near their resolutions! Bear in mind that because of the Trump impeachment hearings that your show may be totally or partially interrupted, and ABC’s pattern seems to be if it is not interrupted in all time zones or partially interrupted, episodes will be available in their entirety on abc.com with no sign-in after 8:00 PM EST that night; please check General Hospital spoilers daily for updates. There will be hearings Tuesday, Wednesday and Thursday of this week.

Kim Nero (Tamara Braun) leaves Port Charles without Franco “Frankendrew” Baldwin (Roger Howarth) but seems to be adjusting better than thought as she smiles at Hayden Barnes (Rebecca Budig) who apparently plans to move in to the apartment Kim is vacating with her daughter Violet Barnes (Jophielle Love).

Or is she renting it for Nikolas Cassadine (Marcus Coloma)? It may not be as sumptuous as what he’s used to, but it would solve a lot of roommate problems that he and Jasper Jacks (Ingo Rademacher) have been having, and no one would expect to look for him there!

At General Hospital, Lucas Jones (Ryan Carnes) continues to confront Brad Cooper (Parry Shen) about his lying habits and now that Liesl Obrecht (Kathleen Gati) has put some further doubts into Lucas’ head, he wants to know why everybody’s after him! Of course, Lucas thinks now that Brad had some type of collusion with the late Shiloh Archer (Coby Ryan McLaughlin) regarding Wiley Cooper-Jones (Erik and Theodore Olson)! General Hospital viewers will recall that Brad interrupted the conversation in Monday’s episode, but Obrecht got through to Lucas in spite of it, it appears!

Brook Lynn Ashton (Amanda Setton) is still at Charlie’s Pub after Julian Jerome (William DeVry) tried to close for the day, and she overheard everything that Brad and Julian had discussed before Brad left, including hearing them talking about a secret about Brad and Lucas’ son, and Sonny Corinthos’ (Maurice Benard) being alive. Longtime General Hospital viewers will recall that Brook Lynn, named after the city “Brooklyn” by her parents Lois Cerullo (Rena Sofer) and Ned Quartermaine (Wally Kurth) once dated Lucas before he came out, and she also had a minor crush on Dante Falconeri (Dominic Zamprogna) and was one of Nikolas Cassadine’s (Marcus Coloma) as well; no wonder her ears perked up when she heard Lucas and Sonny’s names!

She likely doesn’t know who Julian is although she may have heard his name, and she may know he is Leo Falconeri’s (Aaron Bradshaw) birth father if she’s been keeping in touch with Ned and her stepmother Olivia Quartermaine (Lisa LoCicero). The Cerullos and the Falconeris were friends back in Bensonhurst. She gives Julian some advice; she asks him why he would risk getting burned, and advises him to get out while he can!

At General Hospital, Franco, still in his persona as Drew Cain (Billy Miller) looks for and finds Elizabeth Baldwin (Rebecca Herbst). He stuns her as he tells her that “this life belongs to Franco!” “Frankendrew” decided on his own, as “Drew” that he had to undergo the procedure to remove his Drew Cain memories and try to give Franco back his life and memories. Of course, the procedure will be risky but Drew’s conscience cannot go on letting him usurp Franco’s own life and memories. He has to pay Franco back for saving him as a child, which is probably what he will also tell Elizabeth since that is what he told both Jason Morgan (Steve Burton) and Kim.

At the Corinthos house, Olivia has received a manila envelope which sounds like it may be from the WSB treatment facility where their son, Dante has been for the past year or so, trying to overcome the programming and the post-traumatic stress disorder he was suffering from. Olivia has not yet opened the envelope but obviously fears it is terrible news as she thinks that she and Sonny should open it together. Will it confirm that Dante is never coming home again?

GH Spoilers – The Verdict Is In!

At the courthouse, Sam McCall’s (Kelly Monaco) bench trial has come to an end and Judge Sandra Madrigal (uncredited actress) has ruled. In what was supposed to be the Friday cliffhanger that should have aired on Friday, November 15 but was pushed ahead by the Trump hearings on last Wednesday and Thursday, she says, “Samantha McCall, I find you _______”! Viewers will need to tune in to find out what she rules, but Sam will be shaken so it may not be good!