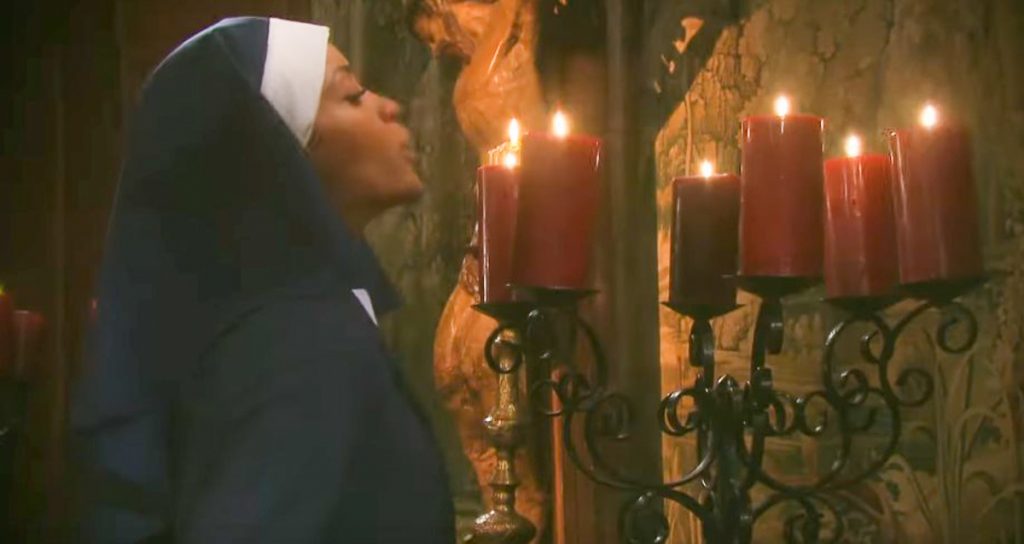 Days of Our Lives spoilers confirm Kristen DiMera (Stacy Haiduk) and Lani Price (Sal Stowers) left Salem. During a recent episode, the two were in a church dressed as nuns. They chatted about the events that led to them leaving town and Kristen — who has always been a self-serving villain — felt empathy for Lani and comforted her. So, why were they dressed as nuns?

Gabi Hernandez DiMera (Camila Banus) got away with tampering with Julie Williams’ (Susan Seaforth) pacemaker. She also still has the app on her phone so she can slow or speed up Julie’s heart at any time.

Lani is heartbroken over having to break Eli Grant’s (Lamon Archey) heart. She is also getting more angry about Gabi literally getting away with attempted murder via smartphone app. She confides in Kristen about the situation.

Days of Our Lives spoilers reveal that Kristen did some evil acts before leaving Salem. One of which was killing Haley Chen (Thia Megia). However, it is implied that she changes from a villain into a decent human being after she leaves town.

While talking to Lani and learning why she was forced to leave Eli, Kristen appeared to have empathy. She comforted the former Salem detective.

Fans are wondering what the deal was with Kristen and Lani wearing nun outfits. They were in a church and were lighting candles. Lani seemed to be praying at one point. The only possible explanation is that they are staying at a convent. Even though they are not nuns, perhaps the convent asked them to wear the outfits out of respect.

Another speculation is that the bizarre scene might be part of Jennifer Horton’s (Melissa Reeves) coma storyline. Even though she is awake now, that also could be part of a dream. Maybe she’s still asleep and all the craziness in Salem is just her dreaming.

Why do you think Kristen and Lani were wearing nun outfits? Was it for a specific reason or could all of this just be Jennifer having a coma dream?

Be sure to tune in to catch up on everything happening on DOOL right now. Come back here often for the latest in Days of Our Lives spoilers, updates, news and rumors! news and updates!