“General Hospital” spoilers for Wednesday, January 23, tease that Charlotte Cassadine (Scarlett Fernandez) will get some horrible news. She’ll grow concerned when she learns Lulu Falconeri (Emme Rylan) isn’t coming to get her. Lulu will start asking questions about her mommy, so Valentin Cassadine (James Patrick Stuart) and Nina Reeves (Michelle Stafford) will have to reveal the awful truth.

Laura Webber (Genie Francis) will console Charlotte later. The poor kid should feel a little better once she gets some hugs from her grandma. Over with Maxie West (Kirsten Storms), she’ll have to deal with the reality of all this, too. Maxie will struggle with the possibility of losing one more person she loves. She’ll decide to head to Nathan West’s (Ryan Paevey) grave and open up about her pain.

It looks like Maxie will have something else on her mind as well. She may bring up how difficult it is for her to move on. Maxie is falling for Peter August (Wes Ramsey), but it’s tough to truly put Nathan behind her. She may want to chat with her dead hubby about that and try to work through her complex feelings.

At GH, Anna Devane (Finola Hughes) and Dr. Hamilton Finn (Michael Easton) will consider another twist in the virus mystery. “Dr. Kevin Collins” aka Ryan Chamberlain (Jon Lindstrom) suddenly went blind, so Finn and Anna assume he’s got the same virus. At they ponder this intriguing case, Finn will wonder how well Anna knows Kevin. He’ll have questions about why “Kevin” is tied to this mess. 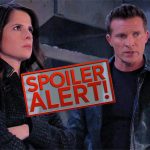 Other “General Hospital” spoilers say Laura will be on a mission. Now that Lulu’s been targeted, enough is enough. Laura will confront Jordan Ashford (Briana Nicole Henry) about what she’s doing to catch the killer. She’ll insist they have to stop this guy as soon as possible.

Sonny Corinthos (Maurice Benard) will echo the idea, but the cops are doing everything can. Jordan may assure Laura that they’ll getting closer to the culprit. Thanks to the evidence left at the crime scene, Jordan has a hunch that the jig is almost up for the murderer.

In Ryan’s room, Ava Jerome (Maura West) will want to support him through his ordeal. Of course, Ryan will mostly be concerned about Lulu – and not because he wants her to survive! Ryan is the one person in Port Charles who’s hoping for a grim fate. He’ll briefly think Lulu bit the dust, but Ava will undoubtedly correct him. It sounds like Lulu’s still got some hot stories left in her.

“General Hospital” fans can also expect Sam McCall (Kelly Monaco) to leap into action. After calling for help, Sam will have to save Jason Morgan (Steve Burton) from danger. She’ll gladly step up so that Jason makes it out of this situation alive.

GH has another fantastic episode on the way. We’ll give you updates as other details and rumors emerge. Stick with the ABC soap and don’t forget to check SOS often for the latest “General Hospital” spoilers, rumors, updates and news.