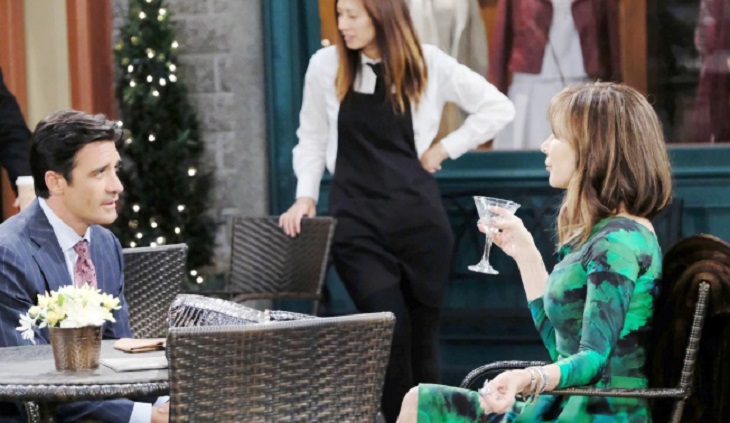 “Days of Our Lives” spoilers for Wednesday, January 23, tease that Eve Donovan (Kassie DePaiva) and Jennifer Horton (Melissa Reeves) will face off again. Their conflict will erupt over Eve’s manipulation and the life she’s robbing Jack of. Jennifer will feel like Eve needs to back off and let Jack bond with his family again. She’ll feel confident she could help Jack if Eve would just get lost.

Eve, on the other hand, will think she’s the best thing that ever happened to Jack. She’ll argue that she’s the much better woman here. Of course, Jennifer will fire back that this is all about revenge. By the time they wrap up this showdown, “Days” spoilers say their feud may be worse than ever!

Meanwhile, Jack will enjoy a visit with his son. He doesn’t remember JJ Deveraux (Casey Moss) or the connection they used to have, but JJ will hope they can change that. “Days of Our Lives” spoilers say their relationship will grow stronger on Wednesday. They’ve got a long way to go, but it should be nice to see the Deveraux men catching up.

DOOL fans can also expect a warning from JJ. He’ll urge Jack to see that Eve’s just using him. Jack’s certainly had his suspicions about that, but Eve says all the right things and fills him with all the wrong ideas. “Days of Our Lives” spoilers hint that Jack will file JJ’s warning away for later, so let’s hope he’ll wise up down the road.

At the hospital, Tripp Dalton (Lucas Adams) will meet Haley Chen (Thia Megia). He’ll be there for some minor medical care, but there’ll be some major flirting going on. Tripp will like Haley a lot and she’ll definitely think he’s sweet, too. Could DOOL capitalize on their spark at some point? Time will tell, but they’re at least presenting the option.

Other “Days of Our Lives” spoilers say Kate Roberts (Lauren Koslow) will get a surprise. Ted Laurent (Gilles Marini) will waltz over to her table at the café and insist that he’s back in town for good. He’ll hope they can let the past go, but that may be tough for Kate. She’s usually the kind of gal who holds a grudge!

However, Kate will be willing to dish out some advice. When she realizes Ted’s interested in Hope Hernandez (Kristian Alfonso), Kate will note that she’s a married woman. She’ll suggest that Ted should leave Hope alone, but he won’t think so. Marriage vows don’t stop most soap characters and they won’t stop Ted either!

“Days” viewers will want to check out Wednesday’s exciting episode. We’ll give you updates as other news and rumors emerge. Stick with DOOL and don’t forget to check Soap Opera Spy often for the latest “Days of Our Lives” spoilers, rumors, updates and news.