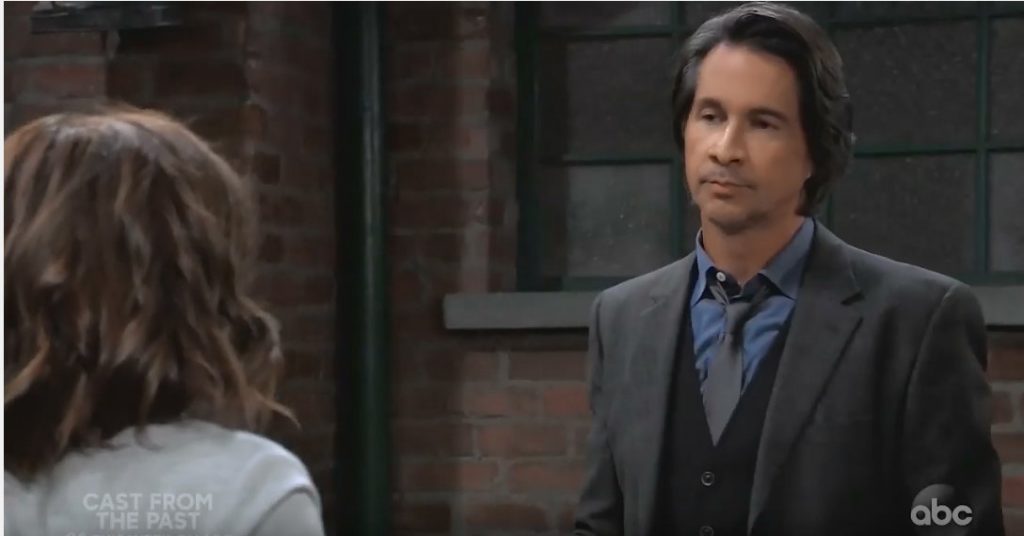 General Hospital spoilers tease that Tuesday, October 15th’s GH will be another hour of exciting drama and tense situations for fans!

Dr. Hamilton Finn (Michael Easton) talks to Alexis Davis (Nancy Lee Grahn) about his ex-fiance Hayden Barnes (Rebecca Budig). Finn knows something is not adding up when Hayden has made excuses about having a dog named Honeybun and attributing a finger painting to Aiden Webber (Jason David) who denied making it. He tells Alexis that he knows that Hayden is lying to him!

Valentin Cassadine, (James Patrick Stuart) who was ready to take Charlotte Cassadine (Scarlett Fernandez) back to Greece to live, is surprised by Nina Reeves (Cynthia Watros) showing up at Wyndemere. Nina sternly tells Valentin she needs to hear him say “it” – “it” probably being that he wasn’t behind the fake daughter scheme.

Valentin would probably be best to tell her the truth of trying to find her child and running into a dead end, and then feeling forced to come up with a fake daughter instead of having Nina’s hopes up for nothing, as he told Liesl Obrecht (Kathleen Gati) in Monday’s episode. But will Nina even believe that?

Elsewhere at Metro Court, Liesl encounters Peter August (Wes Ramsey) and delivers some kind of threat to him! Peter looks at her and sarcastically asks her if that’s supposed to scare him, as Liesl looks back angrily and says it should! What is Liesl up to now? Is she, too, now a threat to Peter and Maxie Jones’ (Kirsten Storms) relationship? Does she know about Peter’s secrets that he has been trying so hard to keep hidden and now is leveraging him?

Carly Corinthos (Laura Wright) talks to her ex-husband Jasper “Jax” Jacks (Ingo Rademacher) about the past and about her late son Morgan Corinthos (Bryan Craig). Carly admits if she had not gone back to Sonny Corinthos (Maurice Benard) that Morgan would be alive!

That blame should actually not be on Sonny but on Ava Jerome, (Maura West) since she is the one who tampered with his bipolar meds, and on Olivia Jerome, (Tonja Walker) who planted a bomb in their brother Julian Jerome’s (William DeVry) car, which blew up when Morgan tried to steal it while not making wise decisions because of his bipolar meds having been tampered with! Maybe she figures Morgan would have not come back to Port Charles if she had not gone back to Sonny, or the GH writers are rewriting history again!

It looks like Sonny might be visiting Morgan’s grave, as he kneels down and says out loud “I’ve missed you buddy, so much!” Sonny and Carly frequently “talk to” Morgan when visiting his grave. Viewers will recall that only a couple of small belongings were ever found after the explosion, and no body. Perhaps Sonny wants Morgan to know somehow that he has a new baby sister.

Diane Miller (Carolyn Hennesy) has bad news for Sam McCall (Kelly Monaco) and Jason Morgan (Steve Burton) as she tells them Sam will be transferred to Pentonville tonight, and there’s nothing she can do since the FBI has jurisdiction. Jason looks on in shock at hearing those words!