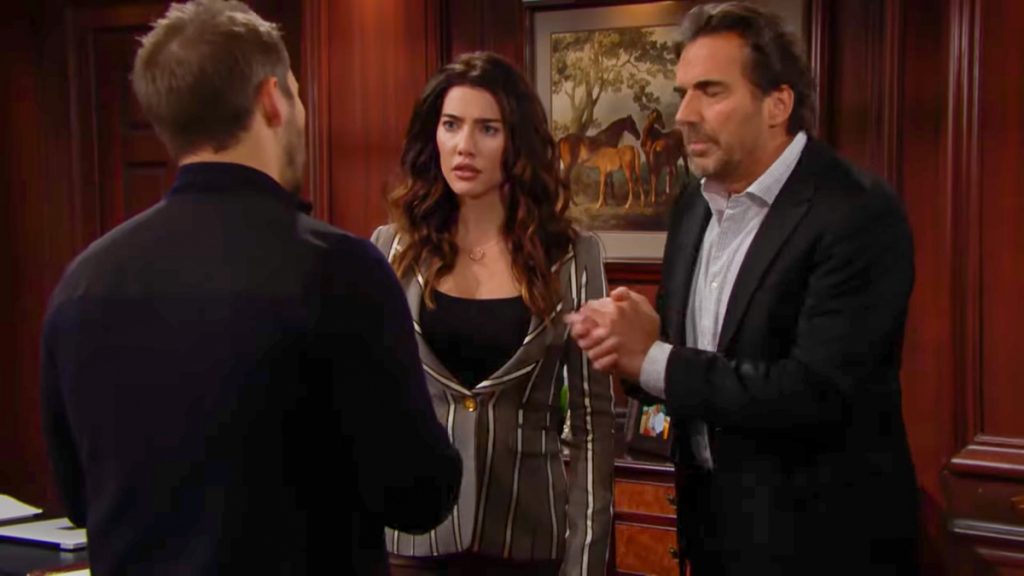 The Bold and the Beautiful spoilers for Tuesday, November 19, tease that things are going to heat up on the CBS drama. But before we get to that, we have a programming note to pass along. Impeachment hearings are scheduled for Tuesday in both the morning and the afternoon, so there’s a very good likelihood that Tuesday’s show will be pre-empted. But in the event the show airs on Tuesday, here’s what you can expect.

As B&B viewers know, Ridge Forrester (Thorsten Kaye) has just heard a shocking statement from Hope Logan (Annika Noelle). With Brooke Forrester (Katherine Kelly Lang) by her side, she told Ridge that his son Thomas Forrester (Matthew Atkinson) is dead. This came after Ridge came to Brooke’s mansion telling Hope that he knew what she did.

Of course, Ridge was referring to the fact that Hope got Thomas to sign adoption papers, so he seemed pretty startled to hear Hope claim that Thomas was gone forever. But it seems that things will now go in a very different direction than Hope imagined when she decided to confess to Ridge. Given ongoing B&B spoilers, it appears that Brooke will interrupt Hope and cover with another explanation for Hope’s big statement.

For example, spoilers for later in the week indicate that Ridge will be shocked that Brooke lied to him about something big. And chances are, that something will be that Brooke withheld information from Ridge about Thomas’ supposed death. Even though it will turn out that Thomas is very much alive, the point will be that Brooke thought he was dead and purposely didn’t tell Ridge.

At any rate, it appears that Brooke will step in and steer the conversation in a very different direction than the direction that Hope was going. The Bold and the Beautiful spoilers say that Hope will find herself struggling to tell Ridge why Thomas is missing. And Brooke will likely step in again with some explanation about where Thomas could be.

Of course, Brooke wants to protect her daughter, and she’s been hinting to Hope that they not tell anyone what went down on the catwalk at Forrester. It appears that what Brooke will end up telling Ridge is all about how terrible Thomas was to Hope, and how he offered to allow her to adopt Douglas Forrester (Henry Joseph Samiri) if she slept with him.

And that’s something that will horrify Ridge and drastically alter the nature of the conversation. It seems that Hope will stand by and verify that story for Ridge, and ultimately Ridge will leave. According to B&B spoilers, Ridge will then go catch up with Steffy Forrester (Jacqueline MacInnes Wood), who will also learn about Thomas’ indecent proposal to Hope.

Bold & The Beautiful Spoilers – Ridge Forrester Worries About His Son

It seems that both Ridge and Steffy will be deeply worried about Thomas, but that they won’t suspect that he could be hurt or dead. They’ll just be concerned for his psychological health and will want to offer him their help – if they could just find him. Plus, Ridge will likely want to get Thomas’ side of the story about the indecent proposal. At any rate, they’ll be concerned as Thomas remains missing.