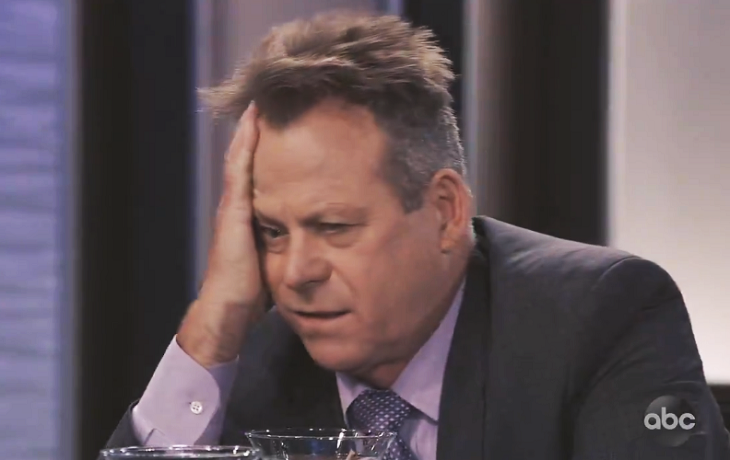 First, Hayden Barnes (Rebecca Budig) talks to her boss and partner Jasper Jacks (Ingo Rademacher) and tells him that there’s been a complication in their project. Depending on what their project is, that complication could be anything from Hayden having promised Liesl Obrecht (Kathleen Gati) for a dinner date with him as a bribe, to Franco Baldwin (Roger Howarth) being the recipient of Drew Cain’s (Billy Miller) pre-2012 memories. But it’s likely more something to do with her bribe to Liesl!

Liesl is already at the Crimson offices bragging about her date with Jax. It hasn’t likely been quite set up yet, but she probably wants Maxie Jones (Kirsten Storms) to help her doll up and wear something cutting-edge to impress Jax. Running into him while she’s there would be the icing on Liesl’s cake! Maxie exclaims to Liesl, “You have a date?!”

Meanwhile, over at General Hospital Chief of Staff Monica Quartermaine’s (Leslie Charleson) office, Dr. Kim Nero (Tamara Braun) looks like she is handing her resignation papers as she tells her she’s leaving Port Charles. It looks like all plans are still go for Kim and Julian Jerome (William DeVry) to move to Manhattan.

At the PCPD, Scott Baldwin (Kin Shriner) talks to Curtis Ashford (Donnell Turner) and Drew Cain (Billy Miller). He wants them to help solve the problems Franco is experiencing as a result of the memory transfer of Drew’s pre-2012 memories. But he also wants him out of jail as well. Scotty tells them he’s come up with a workaround, but he doesn’t think Franco’s going to like it.

At the Corinthos house, Josslyn Jacks (Eden McCoy) updates her mother, Carly Corinthos (Laura Wright) likely on her efforts to help her “cousin” Dev Cerci (Ashton Arbab) get ready to attend and do well in an American high school.

As General Hospital viewers will recall, he really didn’t think he would need to go either to high school or college, as he expected to join her stepfather Sonny Corinthos’ (Maurice Benard) business. And he meant not Volvonino’s Gym or Corinthos Coffee, but Sonny’s other business. Josslyn suggests just forgetting school altogether, and General Hospital viewers can be pretty sure that she means for Dev.

If Dev does have any ulterior motives or is not what he seems to be, then he has Sonny completely fooled. Jason Morgan (Steve Burton) is still suspicious of Dev. He stops in to the warehouse while Sonny is there. Sonny knows that Jason is suspicious and asks him, “Just want to see how my new hire’s working out?”

In the jail at the Port Charles Police Department, Shiloh Archer (Coby Ryan McLaughlin) taunts Franco as he’s taken from his cell to be transported to Pentonville. Franco, as Drew, told him he wanted him to pay for everything he had done. Interestingly, he told Shiloh he remembered being knocked out when he didn’t tell Jason that on Friday.

Even though Jason specifically asked him if he remembered being kidnapped. Shiloh taunts him, telling him there’s so much more that he wouldn’t know. This was after offering him the name of Helena Cassadine’s (Constance Towers) accomplice!