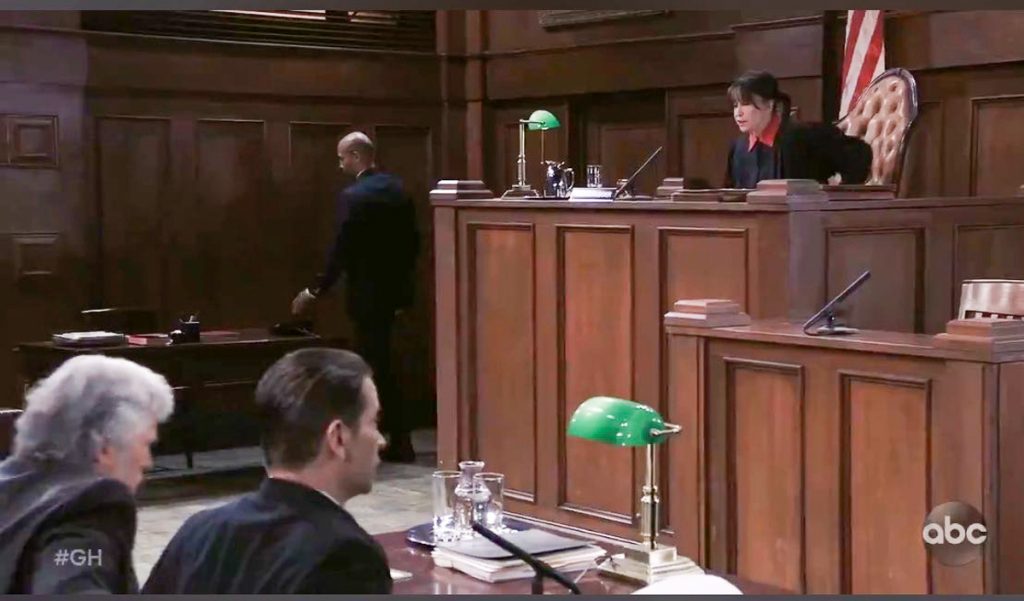 General Hospital spoilers for Thursday, October 24 tease another exciting day of drama for GH fans as Franco Baldwin’s (Roger Howarth) continues and other mysteries play out!

Curtis Ashford (Donnell Turner) is meeting with Laura Collins (Genie Francis) and has an idea. Perhaps they are talking about the quandary they are in because all they have of Helena Cassadine’s (Constance Powers) portrait, which contains the clues to where the codicil to Mikkos Cassadine’s (John Colicos) will is, or possibly in the frame behind the portrait! Little do they know that the portrait has turned up, but Curtis may still have a good idea on how to enlarge the photo Laura has of it on her phone!

Josslyn Jacks (Eden McCoy) is overjoyed when her father, Jasper Jacks (Ingo Rademacher) gives her a gift! It’s a little too early for her birthday, but she is thrilled that he remembered, so it must be some type of anniversary for her. Whatever it is, she is very, very happy that her father remembers the occasion and hugs him tight!

At Franco’s hearing, Monica Quartermaine (Leslie Charleson) is on the stand and testifies as a witness for Martin Gray (Michael E. Knight)! That is bound to cause some problems between Monica and Elizabeth Baldwin, (Rebecca Herbst) who of course also is in the courtroom. Monica says, very convincingly, that DNA does not define a person, obviously rebutting all the identity documents submitted by Scott Baldwin (Kin Shriner) in Wednesday’s episode!

Elizabeth is probably called to the stand by Scott, after Monica’s testimony. She is very upset as she looks towards Franco, dressed in Navy blues complete with all the medals, and firmly states that “That man is NOT Drew Cain!” However, he did respond as Drew Cain would have when Martin was badgering Cameron Webber (William Lipton) on the stand in Wednesday’s episode and told him to stop it! Fans were likely expecting Franco had returned, but it was not the case; however that sounded more like the Drew Cain viewers knew and loved.

At the Corinthos house, Sonny Corinthos (Maurice Benard) questions Dev Cerci, (Ashton Arbab) as he is caught sneaking upstairs with several large boxes. Sonny wants to know what’s in the boxes! Dev wasn’t at the family gathering to welcome baby Donna Corinthos (Ella and Emma Hulen) home, and if it was something for her, it’s doubtful they would be plain tan packing boxes and that Dev would be attempting to sneak them upstairs!

Dr. Hamilton Finn (Michael Easton) confronts his ex-fiancée, Hayden Barnes, in the hallway at General Hospital. It is probably in front of, or close to their daughter Violet Finn’s (Jophielle Love) hospital room as he angrily confronts Hayden, wanting to know why she didn’t tell him about their daughter! General Hospital fans want to know, too!