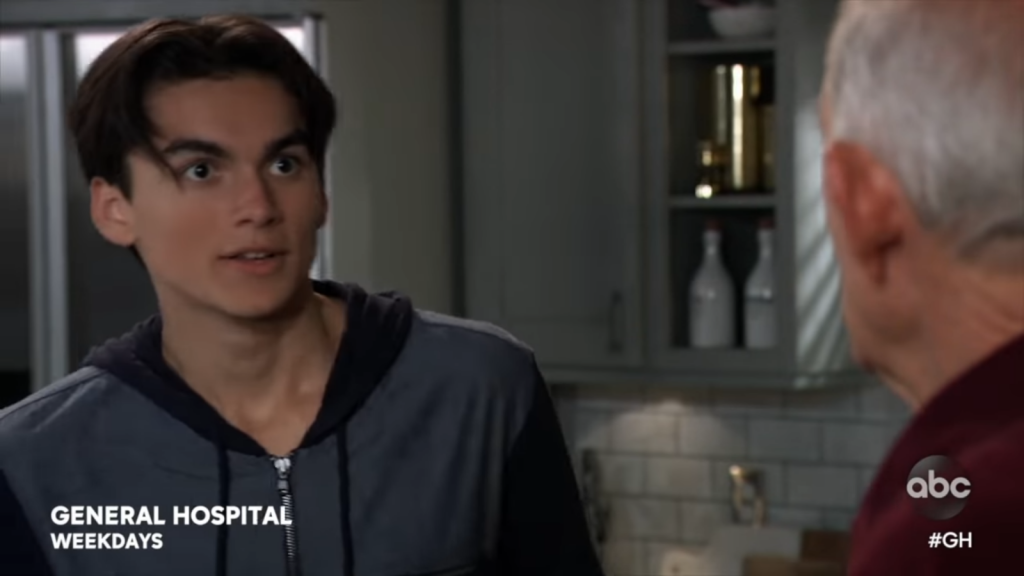 General Hospital spoilers for Friday, October 11 tease that this will be another exciting hour full of drama and confrontations for GH viewers!

At Charlie’s Pub, it would appear that Brad Cooper (Parry Shen) has finally gotten on Julian Jerome’s (William DeVry) last nerve! Spoilers say that Brad again asks Julian for help, most likely to continue to keep the baby swap secret a secret and to continue to help him keep Wiley Cooper-Jones’ (Erik and Theodore Olson) true identity as Jonah Corinthos a secret! Viewers will recall that Brad was asked for his help in being a character witness for Nelle Benson (Chloe Lanier) in a previous episode, and he might be asking for Julian’s help to set up a mob hit on Nelle or some other outrageous request and threatens him if he doesn’t comply! Ava Jerome (Maura West) enters and witnesses Julian trying to choke Brad as he tells him he doesn’t take kindly to threats!

Elsewhere, Dev Cerci (Ashton Arbab) seems to feel a little threatened by something Josslyn Jacks (Eden McCoy) is getting ready to do on her cell phone, as he looks shocked and asks her, “Wait a minute – what are you doing?!” As viewers will recall from previous episodes, Joss had confessed the whole Dev issue to her father, Jasper Jacks (Ingo Rademacher), and then admitted it to Dev, who now is afraid that Jax might rat him out and get him deported! Joss had then assured him her dad wouldn’t do that and that her stepfather Sonny Corinthos (Maurice Benard) would continue to protect Dev so he shouldn’t worry, and she will likely tell him something similar in tomorrow’s episode.

Outside the Crimson Magazine offices, Michael Corinthos (Chad Duell) holds a box of Sasha Gilmore’s (Sofia Mattsson) belongings after he and Sasha went to clear out her desk, and he and Sasha encounter Lucy Coe (Lynn Herring). Lucy had been considering relaunching her cosmetics company, CoeCoe Cosmetics, and had expressed interest in using Sasha as her model in her marketing campaign called as it had been previously, “The Face Of Deception”. Lucy hugs Sasha and excitedly squeals they’ll make millions! But did Sasha really take her up on her previous offer, or is Lucy assuming she has after finding out she’s not working at Crimson anymore?

Is Sasha leaving town on #GeneralHospital?https://t.co/Q84xDRFDJp

Elsewhere, Sonny and Alexis Davis (Nancy Lee Grahn) catch up; they share a daughter, Kristina Corinthos-Davis (Lexi Ainsworth) and haven’t touched base in a while. It sounds like they may be engaging in a little gossip about some mutual friends, as Sonny tells Alexis that he hopes some “she” cleaned some “him” out! Viewers will have to tune in tomorrow to get more details on that juicy tidbit!

At Wyndemere, the situation is a lot more clear with one couple who looks like they are now a non-couple! Nina Reeves (Cynthia Watros) has come back to the mansion now occupied by only Valentin Cassadine (James Patrick Stuart) and her aunt Liesl Obrecht (Kathleen Gati) and sometimes his daughter Charlotte Cassadine (Scarlett Fernandez) when it’s his turn to share custody with her mother, Lulu Spencer (Emme Rylan) who just got done ruining his and Nina’s would-be wedding! Nina spent the night on Jax’s couch and he came with her to help her remove her belongings from Wyndemere just in case Valentin gets nasty about things! Nina’s showing her own nasty side as she bitterly tells Valentin she can’t believe anything he says! It sounds like she figured out Valentin was behind the Sasha scam all by herself!

The Bold and the Beautiful Spoilers: Liam Pulling Towards Steffy Again – Can’t Deny The Chemistry!