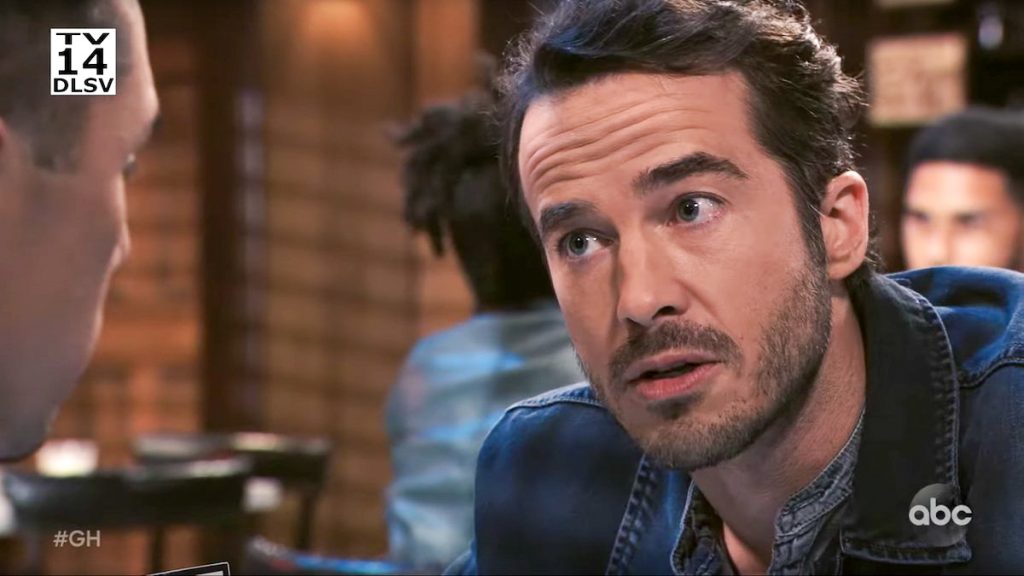 Dr. Lucas Jones (Ryan Carnes) sits with Brad Cooper (Parry Shen) at a table, probably in Charlie’s Pub, wanting to know what he’s hiding from him. Viewers will recall from Wednesday’s episode that Brad had awoken from a nightmare in which Nelle Benson (Chloe Lanier) had told Michael Corinthos (Chad Duell) the truth about Wiley Cooper-Jones/Jonah Corinthos (Erik and Theodore Olson) prior to the parole hearing, and Michael had pushed Brad into a wall and ran off to get his baby!

He had been calling Michael’s name out in his sleep, and Lucas for some reason didn’t connect it to Michael, his nephew! Brad then admitted he was going to therapy and that Dr. Neil Byrne (Joe Flanigan) wanted Lucas to come, too. However, Lucas suspects there’s more to it and asks Brad some hard questions! Perhaps he’s realized that the “Michael” Brad was calling out to in his sleep is Michael Corinthos!

GH Spoilers – Cameron Webber Knows What To Do

Cameron Webber (William Lipton) hugs his mother, Elizabeth Baldwin (Rebecca Herbst) prior to the hearing where it will be decided whether Franco Baldwin (Roger Howarth) will remain in Shadybrook and Dr. Andre Maddox (Anthony Montgomery) will be able to try and reverse the memory transfer of pre-2012 Drew Cain’s (Steve Burton) memories from Franco’s brain.

Cameron is to go on the stand and tell his story of how Franco convinced Shiloh Archer (Coby Ryan McLaughlin) and Dr. Arthur Cabot (Time Winters) to let him take Cameron’s place, and how Franco told him to tell his mother that he’d be back. Cameron tells Liz he knows what to do!

At Pentonville Prison, in his prison cell, Ryan Chamberlain (Jon Lindstrom) stares at a magazine, or its cover, that he has affixed to his wall. It’s the Crimson Magazine issue that featured Ava Jerome (Maura West) called “Midnight In The Garden Of Good And Ava” and as he stares at it, he says with emotion in his voice, “Ava!”

It’s plain to see Ryan is singing the lovesick blues for his “goddess”! But does he have reconciliation or revenge on his mind, as he considers she returned all his letters and told him not to contact her again the last time she visited?

At Charlie’s Pub, Ava wants a cocktail or maybe she’s got something she wants her brother Julian Jerome (William DeVry) to celebrate with her, as she asks him “where’s that cocktail shaker?” She’s got a big smile on her face but he looks concerned. Perhaps he’s concerned that she’s drinking instead of thinking how to move forward from her grief issues and doesn’t want to make her a drink!

At the Metro Court, Dr. Kevin Collins (Jon Lindstrom) sits at a table with his wife, Mayor Laura Collins (Genie Francis) and updates her about Franco’s hearing, where he is to be an expert witness. He tells Laura all he has to do is determine whether Franco is in his right mind or not. That should be easy, since Franco is in Drew’s mind, instead of his own, or maybe that should be the other way around, that Drew is in Franco’s mind! Wrong mind, right body for Franco!

Ryan has a violent prison breakdown on Thursday's #GH!

Kim Nero (Tamara Braun) holds “Frankendrew’s” face in her hands longingly as she looks deeply into his eyes and tells him Drew Cain never died! Of course she is referring to Drew’s memories and some of his personality – however vastly different “Frankendrew’s” personality is from that of the real Drew Cain (Billy Miller) – in Franco’s body. It sounds like the two of them have been notified that the Navy has officially declared the real Drew dead since no body has been found and the plane’s black box didn’t give any clues.

Sonny Corinthos (Maurice Benard) asks someone what their plan is; this could refer to a couple of different situations. He could either be talking to Michael about his plan for helping his girlfriend, Sasha Gilmore (Sofia Mattson) after being arrested for fraud concerning Nina Reeves (Cynthia Watros) or he could be talking to Diane Miller (Carolyn Hennesy) about her plan to free Sam McCall (Kelly Monaco) who has been taken directly to Pentonville Prison.

Jason Morgan (Steve Burton) is at Pentonville Prison talking to someone on the “red phone” which is the phone that prison visitors talk to inmates on. He is undoubtedly talking to Sam as he tells her he wants to give her a way out!