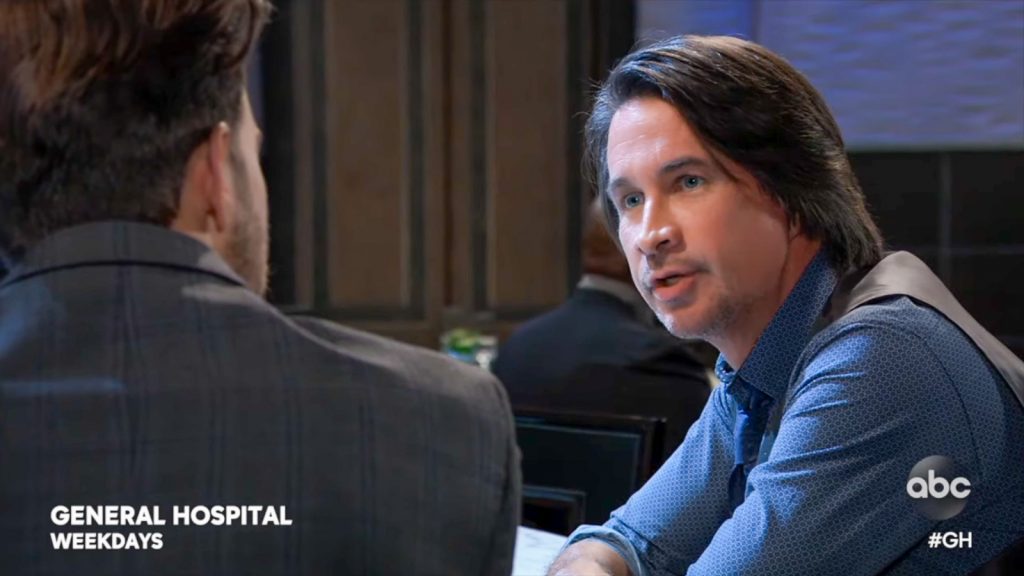 First, Dr. Hamilton Finn (Michael Easton) has a brother-to-brother talk with his younger brother Detective Harrison Chase (Josh Swickard). Viewers will recall from a recent General Hospital episode that he had overheard his ex-fiancee, Hayden Barnes, (Rebecca Budig) on the phone with someone and referring to them as “Honeybun”.

Previously he had seen her with a finger painting which she attributed to Aiden Webber (Jason David) but then when he ran into Aiden again and praised him over the finger painting but Aiden denied painting it, saying he was too old for finger paintings! Finn is obviously getting suspicious about Baby Finn as he tells his brother that he thinks Hayden has been lying to him!

At Kelly’s, Laura Collins (Genie Francis) updates Curtis Ashford (Donnell Turner) and Hayden on the search for the codicil to Mikkos Cassadine’s (John Colicos) will. As viewers will recall, Laura and Kevin Collins (Jon Lindstrom) had detected a code in the painting of Helena Cassadine (Constance Towers) that had been removed from the trophy room and set on the floor against a wall with a cover on it.

Laura found a book that helped decipher the location of the codicil, according to astronomy, and narrowed it down to being there on Spoon Island. It is likely this discovery that she tells of when she says the location to the codicil is – and then the preview leaves off there!

Nina Reeves, (Cynthia Watros) devastated and undone over Sasha Gilmore (Sofia Mattsson) confessing that she wasn’t her real daughter, and Nina figuring Valentin Cassadine (James Patrick Stuart) had once again cooked up a scheme full of elaborate lies, fled her wedding and flew straight into the arms of Jasper Jacks (Ingo Rademacher) who was late arriving as a guest for the wedding.

She wakes up, still in her wedding dress, on his couch and he approaches her with a cup of coffee and tells her good morning. She probably wishes that she had only been waking up from a nightmare and it wasn’t real! Poor Nina!

Elsewhere, Sasha talks to Michael Corinthos (Chad Duell) and tells him she is willing to face the music, meaning the fallout from her confession and any punishment she may be due. Michael will continue to support her and help her with any legal issues that may arise from the fraud, which Valentin had pushed her into.

Is it possible that this secret may not break up Sasha and Michael on #GeneralHospital? #GH https://t.co/sEKPvxGhf4

Liesl Obrecht (Kathleen Gati), likely trying to save her own skin, warns Valentin that they need to send Sasha packing for good! Liesl shows she is the same two-faced snake in the grass she always has been when hours earlier she was keeping Sasha’s secret along with Sasha and Valentin and worried for her niece Nina, who now appears to be missing, being hurt over it! Of course, General Hospital viewers, Nina herself and Jax know where she is!

Elsewhere, Charlotte Cassadine (Scarlett Fernandez) is very upset with her mother, Lulu Spencer (Emme Rylan) who was the Sasha secret whistleblower! Charlotte is angry, and tells Lulu she hasn’t even told her why she ruined the wedding! Charlotte was the flower girl and was excited about her “Papa” remarrying Nina and is very bonded to both Nina and Sasha! Lulu will have a “lulu” of a time explaining her reasons in a way that Charlotte will understand!

General Hospital Spoilers – Maxie Jones Was Right All Along

Maxie Jones (Kirsten Storms) and Peter August (Wes Ramsey) are continuing their conversation from the previous GH episode about the fallout of Sasha’s secret being revealed at Nina’s wedding. Peter tells Maxie that she was right all along with her suspicions about Sasha; he had better hope she doesn’t get suspicious about him!