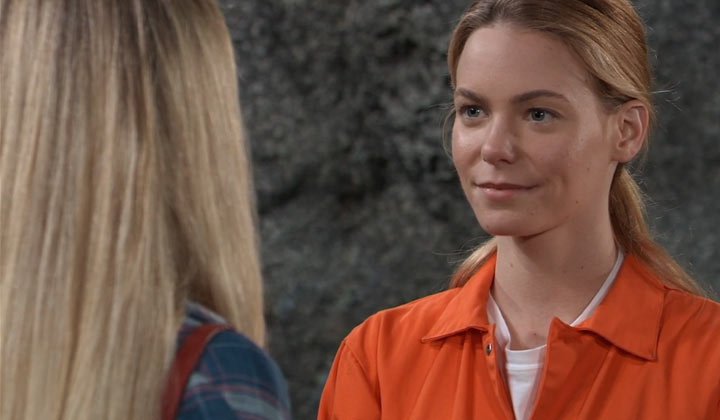 Welcome to your Tuesday, October 8th General Hospital (GH) recap! We begin our day at the chapel where Nina Reeves (Cynthia Watros) is yelling at Lulu Spencer (Emme Rylan) for interrupting her wedding. Lulu reiterates that Sasha Gilmore (Sofia Mattsson) is not her biological daughter and she overheard Liesl and Sasha discussing it the night prior. Nian turns to Sasha and asks her to tell everyone the truth.

At Pentonville prison, Ava Jerome (Maura West) has come to visit Ryan Chamberlain (Jon Lindstrom) who is very happy to see her.

Outside Kelly’s Diner, Willow Tait (Katelyn MacMullen) is basking in the freedom of Shiloh no longer being alive. Her and Harrison Chase (Josh Swickard) walk into the diner and see baby Wiley.

General Hospital Spoilers – The truth bomb comes out at the wedding

In the Chapel, Nina Reeves (Cynthia Watros) continues to scream about what a terrible person Lulu is and she’s just trying to ruin Valentin’s wedding. Nina says the only reason she is saying this lie is because her husband left her. Nina and Liesl Obrecht (Kathleen Gati) say Lulu is just jealous that Charlotte likes her and Valentin better.

Nina asks Sasha again to tell the truth and she blurts out that she is NOT her daughter. Sasha says all three DNA tests were faked and Nina insists that she is wrong. Nina turns to Valentin Cassadine (James Patrick Stuart) and asks him if this is true. Sasha says she went along with the plan because she needed money and she came to love Nina like a mother.

Sasha says that she loves Nina, which infuriates her as she gets right into her face. Nina realizes Valentin was in on the scheme and goes running out of the Church.

Ryan Chamberlain (Jon Lindstrom) is ecstatic that Ava saved all his letters, but she insists she’s been ignoring them. Ava says he brought the letters to the warden so that he will stop harassing her. Ryan brings up the Crimson article and Ava says it’s too painful to talk about.

Ava says Kiki visited her in a dream and its making her revisit her entire life and all the terrible things she done. Ava begs Ryan to stop sending her letters – they are killing her soul.

At Kelly’s Diner, Willow and Chase see baby Wiley with his father Brad Cooper (Parry Shen). They both say hello to Wiley while Brad steps out to take an important phone call. Brad steps outside and the call is from Nelle Benson (Chloe Lanier) who asks him to come visit her – right now.

Willow can’t believe how big Wiley is getting and he’s not a little baby anymore. Chase thinks it was a bad idea for them to offer to watch Wiley for Brad.

GH Spoilers – Nelle Benson is up to no good

At Pentonville, Nelle thanks Brad for coming to see her and he says he left Wiley with Willow and Chase. Nelle tells Brad that she was going to reveal the truth about Wiley to Michael, but she stopped herself. She insists that Michael’s girlfriend needs to stay the hell away from her baby.

Nelle tells Brad that she has a really good lawyer and needs him to help her get out of prison. He can write an affidavit confirming her mental state when she tried to kill Michael.

Maxie tells Sasha that she knew she was a fraud and she had help from Valentin. Michael says he knew the secret and walks Sasha out of the Church.

Ryan tells Ava that she needs him as much as he needs her. Valentin comes back in the Church and tells Lulu she finally got her revenge on him. Nelle runs into Ryan at the prison and tells him she’s never been better.

Nina runs out the Church and right into the waiting arms of Jasper Jax (Ingo Rademacher). Jax and Nina arrive at his new home and she sits down quietly – in total shock. ……flash to preview

Days of Our Lives Spoilers: Gabi Pulls Plug on Brain-Dead Hubby — Donates Stefan’s Heart to Julie ‘Under One Condition’