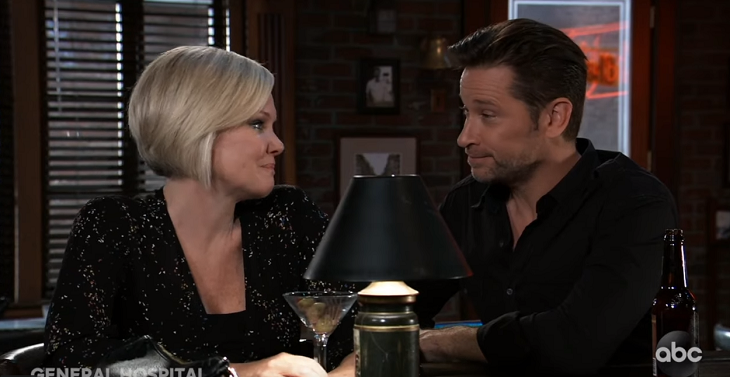 Welcome to your Friday, June 7 General Hospital recap! We begin our day at the Corinthos mansion, where Carly Corinthos (Laura Wright) walks into her living room to see Jasper Jax (Ingo Rademacher) holding a surfboard. He asks where Josslyn Jacks (Eden McCoy) is, Carly says he better have an explanation for the board.

At the Crimson office, Nina Reeves (Michelle Stafford) Sasha Gilmore (Sofia Mattson) and Maxie Jones are having a business meeting. They are trying to decide who will be on their next cover. Maxie says the obvious choice is Ava Jerome (Maura West.).

In Charlies Pub Ava Jerome (Maura West) is having a drink when Franco Baldwin (Roger Howarth) pulls up next to her. He says he has good news, Ryan Chamberlain (Jon Lindstrom) is in a coma.

GH Spoilers– Ryan Is In A Coma

General Hospital Spoilers: Sasha And Michael’s Hot Date– Is It Leading To Something Serious?

At the hospital, Curtis Ashford (Donnell Turner) asks Hamilton Finn (Michael Easton) if he has good news about his wife Jordan Ashford (Brianne Nicole Henry). Finn says the antibiotics are working and she seems to be doing okay. Elizabeth Webber (Rebecca Herbst) is holding a paper which Curtis asks to see – its the do not resuscitate order. Curtis gets upset and does not understand why it’s necessary. Stella Henry (Vernee Watson) says it was a request that Jordan made.

Stella explains the DNR order and why it is necessary. TJ Ashford says its standard procedure for surgery. Finn and Elizabeth say the surgery was a complete success. Curtis goes into her hospital room and Jordan begins to wake up. Stella tells TJ how proud she is of him and all he’s done.

At the pub, Franco tells Ava Jerome that Ryan Chamberlain is in a coma and he feels the worse is over. Ryan is in a coma and when he wakes up he will be going to prison. Ava says that she’s a huge joke, she slept with her daughter’s murderer. Franco says she has lots in her life, like the art gallery.

Jax thinks that surfing would be a great distraction for Josslyn, it will connect her to nature. Jax says she never bothered to learn how to surf, Carly says she’s a Florida girl and loves the beach. Carly says she’s worried about Josslyn recovering from Oscar’s death, Jax says she will be fine. Jax tells Carly that he now owns a big part of Crimson magazine. On Carly’s patio, she tells Jax how happy she is that he’s staying in town. She’s hoping that he and Sonny are able to get along.

GH Spoilers– Sasha Has A Date With Michael

Nina says hell not to the idea of Ava Jerome being on the cover and Sasha agrees. Sasha calls Ava a complete psychopath for what she did to the relationship with Griffin. Nina says Ava is not going on the cover of Crimson as she lists off all the awful things she did to her. Sasha’s phone beeps, she has a date with Michael Corinthos (Chad Duell.)

Jordan's in surgery and her family is rallying around her. Can they keep their spirits up throughout the day?
An emotional, new #GH starts RIGHT NOW on ABC! @donnellturner1 pic.twitter.com/tn3gWhHAOz

Sasha meets Michael at Charlies Pb and asks if she wants to go on a trip to Martha’s Vineyard. Michael thinks she doesn’t want to go but Sasha says it’s her favorite place to visit.

Maxie tells Nina that she needs to not let Ava win, as Jax enters the office. Jax asks Maxie what they were discussing.

Nina finds Ava at Charlie’s Pub and says she wants her on the cover of Crimson.

At the hospital, Carly’s doctor is doing some more tests on her and she’s feeling nervous.

At the hospital, Franco asks Laura how Ryan is doing – she says jail is his next stop. Kevin, Franco, Elizabeth, and Laura all say that they “pulled it off” as they look at each other mysteriously. Ryan is wheeled out of his hospital room as they all watch him leave …flash to preview…