General Hospital spoilers tease another exciting day of drama for GH fans who expected this episode to run on Wednesday, November 20 but once again the Trump impeachment inquiry hearings forced ABC to push the episode out to the next day! Hopefully, Thursday’s episode will run as scheduled but keep an eye out for any updates! Thursday should be the last of the hearings as far as we know.

First, Detective Harrison Chase (Josh Swickard) has words with his older brother, Dr. Hamilton Finn (Michael Easton) over some missed news that he should have been given first hand – about his new niece, Violet Barnes (Jophielle Love)!

General Hospital viewers will recall that Robert Scorpio (Tristan Rogers) had told Chase about Violet, not that it was any of his business to do so, but that was how he learned about her nonetheless! Finn should remind his brother that it is worth noting that his fiancée, Anna Devane (Finola Hughes) has just returned from a six month trip, he has been trying to save the life of Alexis Davis (Nancy Lee Grahn) and he only just found out that Violet is his daughter! Finn will likely apologize for his neglected communication which Chase is accusing him of, however.

Next, Hayden Barnes (Rebecca Budig) wants clarification from Anna. After Anna coming home to discover Hayden in only a shirt of Finn’s, obviously having stayed the night, and then Violet rushing out to ask if Anna was a friend of her daddy’s, any woman might decide she shouldn’t stay with such a man. After all this was in Anna’s own house, although Finn had moved in with her several months ago so it’s really his house as well. Hayden says to Anna, “You’re still getting married, right?” 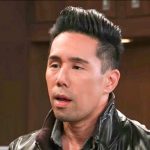 Valentin Cassadine (James Patrick Stuart) shows up as an unexpected visitor of Ava Jerome’s (Maura West) and he sounds like he wants the portrait of Helena Cassadine (Constance Towers) he recently threw out back! He decided to throw it out after his daughter Charlotte Cassadine (Scarlett Hernandez) told him she was frightened of it. Ava, of course has the portrait but it’s in a back room of her art gallery. It sounds like she’s dodging Valentin’s questions about it as he appears rather angry and asks her, “You HAVE Helena’s portrait?”

It looks like Valentin and Nina Reeves (Cynthia Watros) have rescheduled their wedding; and Nina has given her boss, Jasper “Jax” Jacks (Ingo Rademacher) an invitation! Jax is not happy with Nina returning to Valentin after the night she spent on his couch, and General Hospital viewers will recall the flashback scene where Jax, Hayden, and Nikolas Cassadine (Marcus Coloma) were talking and Nina was supposed to be part of the deal for Jax, along with the shipping division of Cassadine Industries! Jax, obviously, declines the wedding invitation!

Charlotte Cassadine (Scarlett Fernandez) sees someone standing by the fireplace in the living room at Wyndemere, and she doesn’t think it’s Santa Claus making an early visit! She spots Nikolas and shouts out at him, “What are you doing in my living room?” She recognizes him as the man she saw at the docks with a gun the night she was rescued from Cassandra Pierce (Jessica Tuck) and she asked her grandma Laura Collins (Genie Francis) about!

She obviously hasn’t seen any photos of Nikolas in either Laura or her mother Lulu Spencer’s (Emme Rylan) houses; or if she has, she’s keeping her mouth shut about it! Nikolas looks more amused than startled by the feisty little blonde; maybe she reminds him of Lulu at that age!

Longtime GH viewers will recall that when Nikolas first came to Port Charles from Greece, it was to save baby Lulu’s life as a teenager, when she needed a bone marrow transplant because of suffering from aplastic anemia. It is unclear if Nikolas knows who she is as far as being Lulu’s daughter although he may figure she’s Valentin’s! He’s her uncle on her mom’s side and her cousin on her dad’s, since Valentin is his uncle!

A livid Jason Morgan (Steve Burton) angrily updates Carly Corinthos (Laura Wright) on Sam McCall’s (Kelly Monaco) bench trial verdict. As General Hospital viewers know, she was found guilty, but at lesser charges than she was originally charged with, and was sentenced to two years in Pentonville Prison. Jason is livid as he tells Carly he should have killed Shiloh Archer (Coby Ryan McLaughlin) from the start! Carly may remind him that if he had, then he would be the one in prison, and for a much longer time period than Sam!

At the Quartermaine mansion, Brook Lynn Ashton (Amanda Setton) and Sonny Corinthos (Maurice Benard) catch up; Brook Lynn has been gone for a while! She asks Sonny if he’s still a lady killer and driving the ladies wild! Their families go back a long way in Bensonhurst!