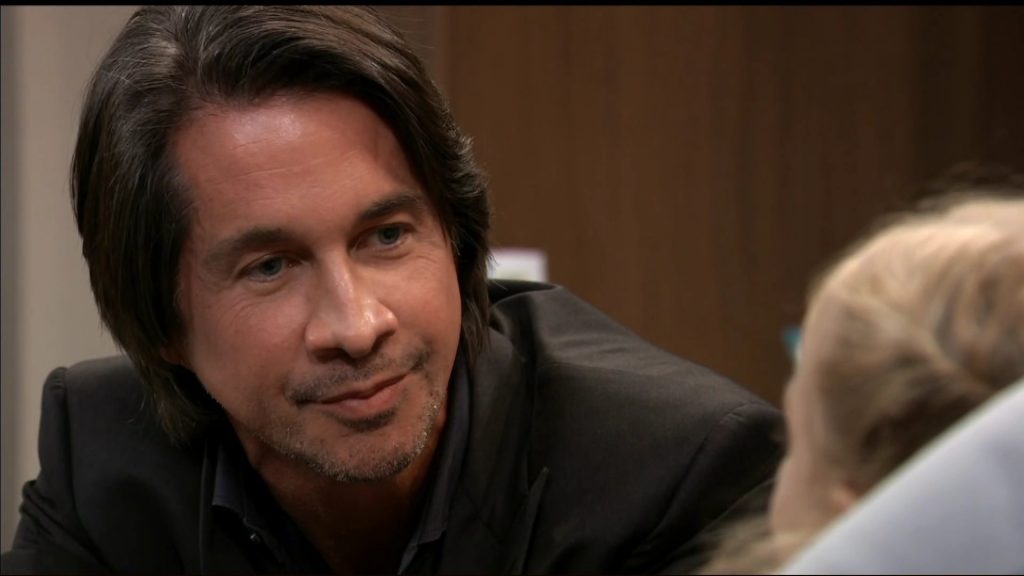 General Hospital (GH) spoilers tease Hayden Barnes (Rebecca Budig) and Dr. Hamilton Finn (Michael Easton) are going to reunite sooner rather than later. The relationship between Anna Devane (Finola Hughes) and Finn seems about to implode once Anna finds out about the child that Hayden and Finn share. Violet Finn (Jophielle Love) was unknown to Finn until a few weeks ago, but Anna won’t stand in the way of the Hayden and Finn if they decide to reunite. Finn wanted to tell Anna in person, and he will soon be able to now that Anna is back in town.

General Hospital Spoilers – But what about Nikolas Cassadine?

So even though Finn may soon be free to reunite with Hayden, Hayden may not be. She is still legally married to Nikolas Cassadine (Marcus Coloma) and she can’t divorce him as long as he’s still legally declared dead. Hayden knows Nikolas is still alive, but Finn doesn’t, so this will be something that will have to be sorted out before Hayden and Finn can make any plans going forward.

It shouldn’t be long before Nikolas is revealed publicly as being alive, but the legal mess caused by his years of pretending to be dead, may take some time to unravel. And his marriage to Hayden might be more difficult to dissolve quickly at least until Nikolas is legally alive. That’s assuming that Nikolas will grant Hayden a divorce. Depending on what happens with the search for the codicil to Mikkos Cassadine’s will, Nikolas may or may not make it difficult for Hayden to move on.

Nikolas has promised Hayden a large payout if she can help him get his estate back. But Hayden hasn’t been much help in that area, instead she has been spending her time with Finn and Violet, so Nikolas might not feel that Hayden is entitled to anything, despite their deal!

Will Nikolas grant Hayden a divorce so she can move on with Finn and start a family with him and their daughter? Or Nikolas make it difficult, despite their agreement? Only time will tell, but some exciting scenes are coming up on General Hospital, airing weekdays on ABC! And don’t forget to check to check back right here for all your General Hospital news, information and spoilers!