General Hospital spoilers for Thursday, December 5 tease another exciting day of drama, mystery and confrontations for GH fans! Your General Hospital show may or may not be interrupted in your area for the continuing Trump impeachment hearings, but if it is, abc.com will show it online after 8:00 pm EST!

Outside the intensive care unit at General Hospital, Brad Cooper, (Parry Shen) in a wheelchair, blames himself for the wreck that injured him badly and put his husband, Lucas Jones (Ryan Carnes) in a coma. He says it’s all his fault, as Sonny and Carly Corinthos (Maurice Benard, Laura Wright) and General Hospital head nurse Epiphany Johnson (Sonya Eddy) look on. Sonny asks Brad why is it his fault? Will Brad spill to Sonny that Wiley Cooper-Jones (Erik and Theodore Olson) is really Jonah Corinthos – to SONNY?!

Michael Corinthos (Chad Duell) is suspicious as Detective Harrison Chase (Josh Swickard) and he discuss the wreck that caused the severe injuries to Lucas and gave Brad a concussion. Michael asks Chase if he thinks someone could have done this on purpose, likely after being told that the brakes failed on Brad and Lucas’ car and they were unable to stop in time to avoid hitting Kendra Lennon’s (Michelle Argyris) car as she was trying to run over Alexis Davis (Nancy Lee Grahn) who she had placed in the road. But, even though Lucas is in a coma, at least they saved Alexis’ life, so there’s that! 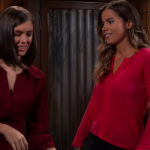 Finally now that all have been notified about Brad and Lucas’ accident that needed to know, Sasha Gilmore (Sofia Mattsson) is able to pin down Willow Tait (Katelyn MacMullen) and ask her how the pregnancy test came out. Is she or isn’t she – pregnant, that is? Only her pregnancy test strip and Willow herself know for sure, and she tells Sasha that it said – General Hospital viewers will have to tune in tomorrow to find out what it said!

At Pentonville Prison, Nelle Benson (Chloe Lanier) welcomes her new cellmate, which is expected to be Samantha McCall (Kelly Monaco)! Nelle smiles and tells her it’s time to catch up! Sam will not care to catch Nelle up regarding anything whatsoever, but she could have done worse for a cellmate – because while having to spend time with Nelle can be “helle”, she’s certainly no Cassandra Pierce (Jessica Tuck)!

At Shadybrook, Nina Reeves (Cynthia Watros) visits a shaken-up Ava Jerome (Maura West), trying to find out where the portrait of Helena Cassadine (Constance Towers) is. The two sit on the floor at the foot of Ava’s bed and she must be talking about Nikolas Cassadine, (Marcus Coloma) who pretended to be his own ghost and scared poor Ava to death; but the meanest thing he did while he tried to find out where the portrait was from Ava is to tell her he was in hell and Ava’s daughter, Kiki Jerome (Haley Erin) was with him! Poor Ava was torn up over that! Nina and Ava have never exactly been friends, but even Nina has compassion for Ava having been told that! She is visibly upset as she asks Ava WHO told her that Kiki was in hell? Question is, will Ava tell her it was Nikolas in spite of his warning her not to tell anyone about his “ghostly visit”, and will Nina spot the Cassadine crest ring that Ava apparently pulled of his hand and is under the bed? Nina will know it’s not Valentin Cassadine’s (James Patrick Stuart)!

Elsewhere, Jasper “Jax” Jacks (Ingo Rademacher) is not a happy camper as he confronts Nikolas with some questions of his own! He is incredulous, and not in a good way, as he asks for clarity concerning Hayden Barnes’ (Rebecca Budig) attack on the pier that caused her to leave town! He repeats to Nikolas in disbelief, “You staged an attack?!”

General Hospital Spoilers – Martin Gray Follows Someone Through A Door

Elsewhere, likely in France where Valentin wanted Martin Gray (Michael E. Knight) to keep an eye on Nicholas Cassadine (Nicolas Bechtel) Martin, bearing a flashlight, follows a man down a dark alley and through a door that the man opens; will that door lead him to Nicholas?