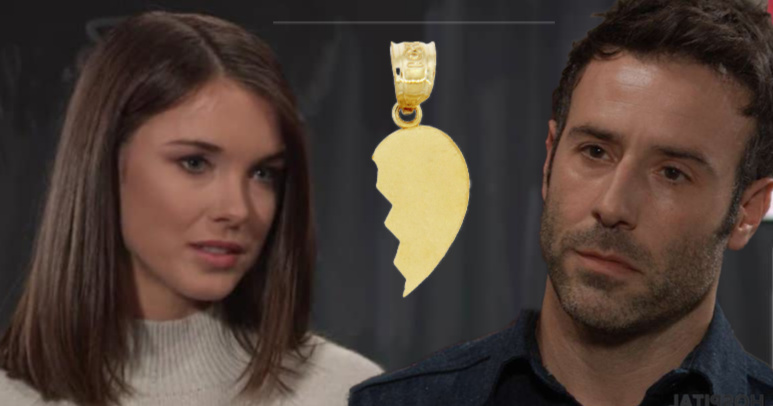 General Hospital spoilers tease that when Shiloh Archer (Coby Ryan McLaughlin) approaches Willow Tait (Katelyn MacMullen) and Detective Harrison Chase (Josh Swickard) and says he has something of Willow’s, it may be the other half of Nina Reeves’ (Michelle Stafford) half-heart necklace!

General Hospital viewers have suspected that Willow may be Nina’s true long-lost daughter ever since the two started having sparring matches over Charlotte Cassadine (Scarlett Fernandez) and all the animosity started coming up between them!

Some General Hospital fans even see a little resemblance between Willow and Silas Clay, who would have been her father, particularly in the eyes. For those GH viewers who haven’t been watching that long, Silas was Nina’s first husband, the father of her child and also of Kiki Jerome (Hayley Erin). Dr. Silas Clay was played by Michael Easton, who now plays Dr. Hamilton Finn, and Silas was killed off the show a few years ago.

Nina and Valentin are back in Willow's classroom, but who will come out on top? Tune into a dramatic, new #GH – STARTING NOW on ABC! pic.twitter.com/EWIA7WMNZn

Considering Willow was in the Dawn of Day cult for a while, apparently taught the children there, and was in the upper level as Shiloh’s “destined”, probably his “destined mate”, and gave birth to his son (which Shiloh doesn’t know anything about) it would not be surprising if Shiloh had something that belongs to Willow; it could be an object precious to her that she gave him in some sort of initiation or ceremony, or it could be something that she left behind in her haste to escape. If that is the case, perhaps Shiloh just recently found it.

Of course, General Hospital viewers know Shiloh has some ulterior motive in telling Willow he has something of hers; he wouldn’t be there with the item just out of the goodness of his heart, although he may indeed have it with him. Other General Hospital spoilers say that the half-heart necklace will turn up, and this may be how it turns up.

Of course, Nina may not see it right away, and Willow will probably not get it back right away if that is indeed the thing of Willow’s that Shiloh has; that revelation may still be down the road a bit. Stay tuned to General Hospital and keep checking General Hospital spoilers frequently to see what happens, and for news, updates, and spoilers!