The daytime television stars that keep fit together, stay together. At least that’s what it looks like between General Hospital Chad Duell (Michael Corinthos) and Maurice Benard (Sonny Corinthos). The two handsome actors proved once again that they have quite a tight bond when the cameras aren’t rolling. Here’s what you need to know.

Duell shared a photo of the two Port Charles actors sharing a moment after a grueling boxing session. If we didn’t know it already, we’d think that these two were an actual father and son duo!

“Boxing with @mauricebenardThanks for pushing us @grasshoppermma !” Duell captioned his photo.

Boxing with @mauricebenard 🥊 Thanks for pushing us @grasshoppermma ! #fitnessmotivation

It didn’t take very long for Duell’s social media followers to react to the photo. Plenty of them commented with, “Maurice legit reminds me of Sylvester Stallone here. Bad ass! Love both of you! Keeping up all of the great work that you are doing” 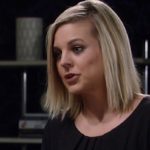 “Good picture of my two favorites. You guys are the best to watch onscreen and off! And BTW Chad looks particularly handsome here,” another fan said.

If that weren’t enough, former General Hospital star Brian Craig (Morgan Corinthos) got in on the action and teased Chad by calling him “tiny.” Ha! We are sure that it was done in good fun.

General Hospital News – Will Morgan Corinthos Ever Return To The Show?

Speaking of Morgan, we know that a lot of fans would love to see him ‘reappear’ on General Hospital sometime soon. And while he is presumed to be dead, we have a feeling that he might show up at any give time.

As many daytime television viewers know, you might be gone, but that doesn’t mean you are gone forever. Of course, fans will have to tune in for all of the action!

Days Of Our Lives Stacy Haiduk Returns As Kristen DiMera