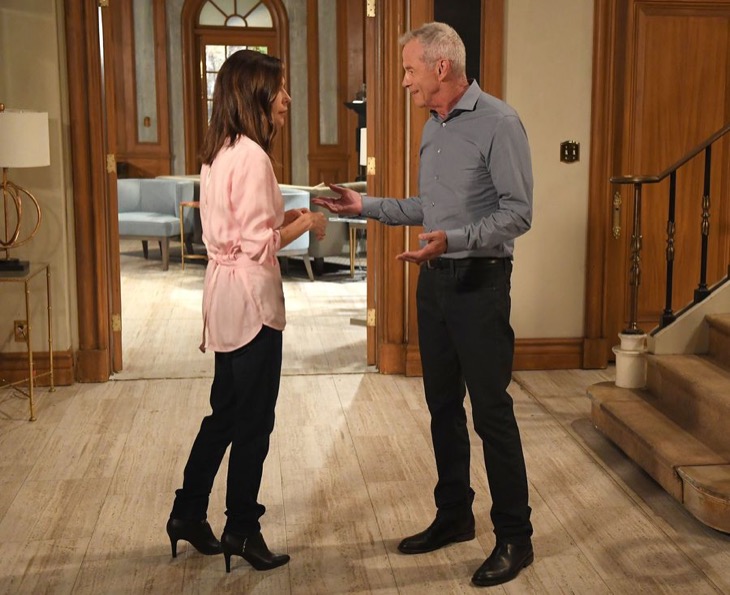 The virus was supposedly eradicated, so Anna wondered to Finn how she got it; however, she recognized Cabot’s name as someone who had once worked in medical research in the DVX when Cesar Faison (Anders Hove) and she were both DVX. She didn’t know exactly what Dr. Cabot did, but the organization was working on biochemical warfare agents, and she and Finn agreed this was no randomly acquired infection!

Since Anna came down with these symptoms of blindness and an extreme headache shortly after undergoing her normally scheduled phlebotomy for her polycythemia vera, it’s likely that the phlebotomy equipment may have been tainted or tampered with….but by who? Could the mysterious Dr. Arthur Cabot be hiding in plain sight at General Hospital, under an assumed name and perhaps having had plastic surgery so no one would recognize him?

Tristan Rogers Returns To General Hospital: Here’s Everything We Know About His Return @SoapOperaSpy https://t.co/eHgCtZkxXY #GH

Another very good possibility is that he’s an old friend of Dr. Liesl Obrecht, (Kathleen Gati); after all, she was involved with Faison for years and recently lost the relationship with her daughter Britt Westbourne (Kelly Thibaud) thanks to Anna’s plotting with her, and unable to find employment to boot! To get revenge on Anna by tampering or tainting with her phlebotomy equipment so she would contract this rare, previously eradicated virus would be right up Liesl’s alley; she probably figured it would never be traced back to her! She may still be in touch with Dr. Cabot and somehow got some of the virus.

However, since Robert’s on his way back, it’s more likely that this Dr. Cabot and Anna’s virus may be connected to the Cassandra Pierce (Jessica Tuck) unresolved storyline, which spoilers say should pick up during the coming year. Liesl may well be tied into it, at least to the point of Anna’s contracting of the virus, but Dr. Cabot may be a double agent working at the WSB medical facility who got Cassandra out of it and into the Canadian clinic where Finn and Robert rescued Anna last August.

Stay tuned to GH and check General Hospital spoilers frequently for the details of Finn, Anna, and Robert’s upcoming adventures!

Bold and the Beautiful Spoilers: Is Reese Sticking Around? We Have The Answer!