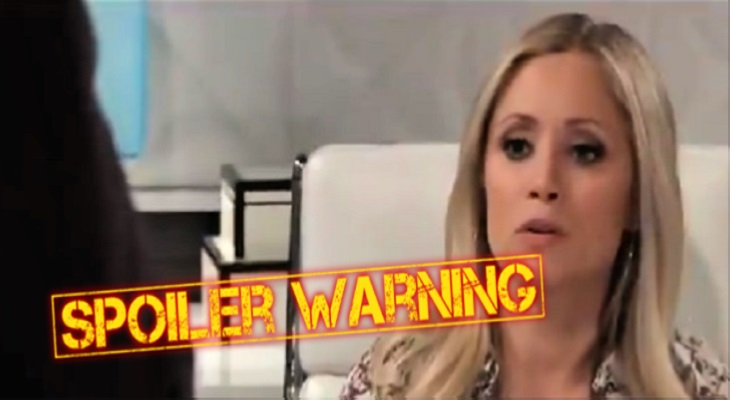 “General Hospital” spoilers for Monday, January 21, tease that Anna Devane (Finola Hughes) and Dr. Hamilton Finn (Michael Easton) will discuss her recent blindness. They’ll mull over when Anna might’ve contracted the virus and ponder why she went blind now. Anna will want answers as soon as possible, but Finn will insist on taking charge. This is more his area of expertise anyway!

Meanwhile, Willow Tait’s (Katelyn MacMullen) guilt will become too much to bear. She’ll tell Harrison Chase (Josh Swickard) that she’s been letting him believe something that isn’t true. This might tie in with Willow’s bereavement group meetings. Chase seems to think Willow had a loved one who died, but she actually just gave her baby up for adoption.

Of course, there are many sides to this story. Willow will tell her version, but GH fans know Brad Cooper’s (Parry Shen) secret with Nelle Benson (Chloe Lanier) changes everything. Willow’s son died and was replaced by Jonah Corinthos. “General Hospital” spoilers say Michael Corinthos (Chad Duell) will remain oblivious on Monday. He’ll corner Lucas Jones (Ryan Carnes) and ask if they can talk.

Michael is “Wiley’s” godfather, so he’ll want to be involved in what’s ahead. He’ll think they should have a chat about “Wiley’s” future. Lucas will agree to have lunch with Michael and get everything squared away, but they’ll both be in the dark on the big swap secret. At GH, Dr. Kim Nero (Tamara Braun) will start to panic. Oscar Nero (Garren Stitt) will be late checking in, so Kim will worry about his condition.

Elizabeth Webber (Rebecca Herbst) will be on hand to calm Kim down and help her through this. They’ll both hope Oscar just got caught up in some fun with Josslyn Jacks (Eden McCoy), but Kim will have a bad feeling about this. It turns out Oscar is indeed having fun with Joss, but they’re about to face a shocker that’s incredibly dangerous. “General Hospital” spoilers point to the teens getting trapped in the catacombs.

Over with Laura Webber (Genie Francis), she’ll vent to Curtis Ashford (Donnell Turner) about Ava Jerome (Maura West). Laura is moving on, but that doesn’t mean she approves of her ex’s new lady. “Dr. Kevin Collins” aka Ryan Chamberlain will make more waves as he approaches Lulu Falconeri (Emme Rylan). It looks like he’ll pull out his knife as he inches closer, so Lulu will naturally grow concerned.

Lulu will ask “Kevin” what he’s doing, but he’ll probably answer with his violent actions. “General Hospital” spoilers suggest that Lulu will be Ryan’s next victim, but it appears he won’t quite finish her off. Lulu will apparently be left lingering between life and death, so there’ll be a glimmer of hope in this darkness.

Across town, Carly Corinthos (Laura Wright) will rant to Sonny Corinthos (Maurice Benard). She’ll mention that someone should get what he deserves, so maybe this will be a serial killer discussion. After Ryan’s latest attack, all of Port Charles will be determined to see the murderer pay the price.

Nevertheless, Ryan will enjoy gloating on Monday. He might want to think twice about getting so smug! We’ll give you updates as other news and rumors emerge. Stick with ABC’s GH and don’t forget to check Soap Opera Spy often for the latest “General Hospital” spoilers, rumors, updates and news.

Stay tuned to GH and keep checking General Hospital spoilers frequently to see who lives and who dies during the remainder of Ryan Chamberlain’s current killing spree!