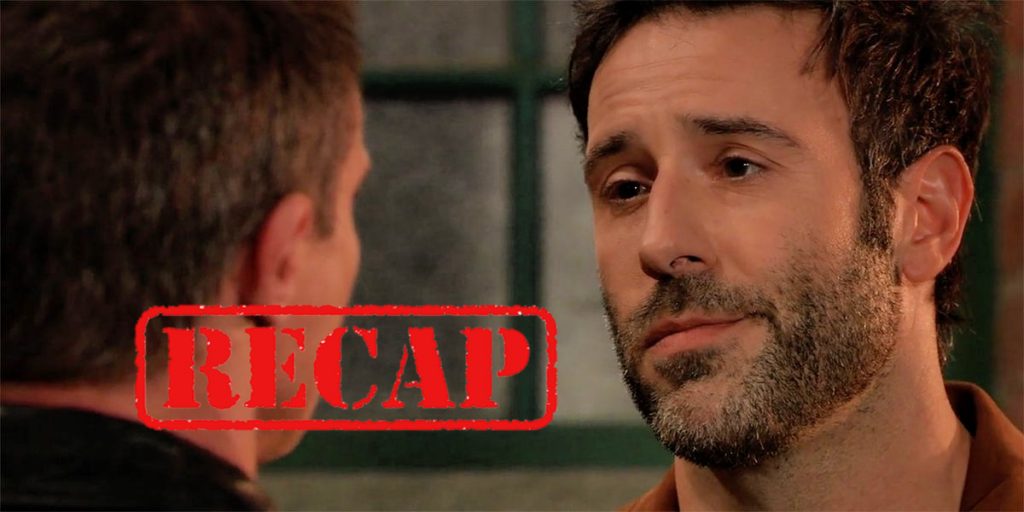 Sam McCall (Kelly Monaco) comes in and thanks Brad Cooper (Parry Shen) for watching Danny while she went to wash her jacket. Brad tells Sam that it was mostly Shiloh Archer (Coby Ryan McLaughlin). Jason is not happy that Shiloh was around Danny at all. Danny asks Jason to go to his grandmother’s and play with Annabelle. Jason tells Danny they can do it later in the week and leaves. Shiloh invites Brad to bring the baby and come to their parenting classes at DOD. Shiloh uses Sam to try and lure Brad into the group.

General Hospital’s Alexis Davis (Nancy Lee Grahn) tries to talk to Kristina Corinthos Davis (Lexi Ainsworth) about her involvement with Dawn of Day. Kristina doesn’t want to hear anything Alexis has to say and completely cuts her out of her life. Kristina dismissed Alexis calling her Miss Davis and walks away. Alexis goes to Sonny Corinthos (Maurice Benard) and asks for his help with Kristina. Sonny tells Alexis he is already dealing with Shiloh and DOD. Sonny refuses to tell Alexis how he is dealing with them. Alexis calls Jordan Ashford (Briana Nicole Henry) and gets the police involved.

Sonny's barely had time to sit down since returning from Turkey, West Coast. But Kristina's situation is too dire to ignore.
An all-new #GH starts RIGHT NOW on ABC! @MauriceBenard #GH55 pic.twitter.com/LvdKlrfFE6

General Hospital’s Michael Corinthos visits Sonny to make sure he and Dante Falconeri (Dominic Zamprogna) are ok after their ordeal in Turkey. Sonny tells Michael about the boy who helped him to find Dante. Michael is concerned about Kristina and asks Sonny if he knows about her connection to DOD. Sonny asks Michael to protect his sister any way he can. Dante visits Sonny after waking up from a nightmare where he killed Lulu Falconeri (Emme Rylan). Sonny suggests that Dante might need to see a therapist to help deal with everything Raj (Noshir Dalal) put him through. Dante tells Sonny that may be a possibility and leaves to go home to Lulu. Sonny is worried that Dante is not handling his ordeal well and hoped to spend more time talking with him before they were interrupted.

After what he saw in her classroom, is Willow willing to tell Chase more about her past with Dawn of Day? #GH is brand-new and STARTS NOW on ABC! #GH55 pic.twitter.com/emGTezLhOI

GH Spoilers: Willow Tait Has A Story To Tell

General Hospital’s Willow Tait (Katelynn MacMullen) opens up to Harrison Chase (Josh Swickard) and tells him how Shiloh pulls people into the cult. Willow was willing to do anything Shiloh asked and willingly slept with him. Willow was the cult teacher but could not bring herself to teach the children to follow Shiloh. Willow realized she had to escape when she discovered she was pregnant and audited a class so she could slowly move her things out and never looked back. Willow changed her name and gave up her baby to protect him from Shiloh and his influence.

Sam's starting to realize she and Jason aren't the only ones on DOD's trail. But how much time do they have to get Kristina out?
A brand-new #GH starts RIGHT NOW on ABC! @kellymonaco1 #GH55 pic.twitter.com/Qnitu2JI2L

General Hospital’s Michael tells Sam that Sonny has ordered Jason to get Kristina away from DOD. Sam tells Michael that it cannot be done that fast. Sam tries to explain that Jason promised to give her more time to help Kristina. Michael tells Sam he doesn’t believe Sonny is willing to wait any longer. Sam explains that sending Jason in now could make matters worse and completely alienate Kristina. Sam leaves to talk to Jason and try to keep things from getting out of hand.

General Hospital’s Shiloh walks outside to find Jason waiting to confront him. Shiloh pushes Jason’s buttons by talking about how impressionable Danny is and how Sam is going to bring him up believing in DOD’s ways. Shiloh accuses Jason of being afraid of change and wanting Danny to react with anger. Shiloh continues to tell Jason how he can help him to change the way he looks and things. Jason warns Shiloh to stay away from Danny. Shiloh wants no part of Jason’s words and continues to push until Jason grabs him by the throat and slams him up against a wall.

General Hospital: Dante Is Shaken By His Dream

General Hospital’s Dante returns home to find Lulu outside waiting to speak to him, and their son Rocco Falconeri (O’Neill Monahan) has baseball things set out to share with his father. Dante is glad to be home but is haunted by this dream and worries that he could hurt someone he loves. Dante continues to hear in his head that he must complete the mission.